I was so freaking nervous going into today.  After all the trouble Theo gave me on Day 1, I was not looking forward to having to go into the ring and perform.  I took him up to graze by the ring first thing in the morning and he was feeling better, but when I told him he couldn't drag me home, he threw yet another fit and ended up back on the lunge line.  It was only ten minutes of ridiculousness, but it was enough to have me very uncertain about our chances of survival when out there all alone in the competition ring. 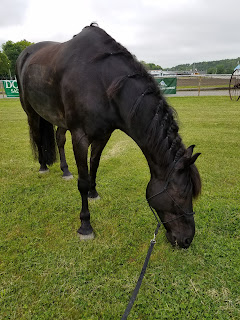 It doesn't help that I heard all morning about horses melting down.  Spun reared and withdrew, got rung out for disobedience, scratched because they couldn't leave warm up, etc.  Marshfield is a tough, tough showground.  I thought our trouble at our last trip here was due to Theo's inexperience.  Nope, everyone says this facility is tough.  There's a bunch of activity and noise behind the judge's booths due to a landscaping company that is always working with machinery. They use horse trailers as judge booths and that freaks a lot of horses out.  And there's just something about the layout that triggers all the barn bound and herd anxiety.

I brought him up to the warm up early for our freestyle so he could cope with the idea of being up there.  He actually adapted pretty well once we started to warm up.  Lots of long and low, trying to keep him with me and chill.  I cantered both ways and sure enough, he would let me sit and ride.  I joined up with the other lady riding a freestyle and we headed over together so our horses had company.

Theo chilled and made out with strangers while waiting for his turn.  He really does love people and somehow managed to schmooze a mint out of a spectator.  How does he always know who has treats?

I took him in for his turn and there was construction behind the judge's booth.  The landscaping company was loading things onto a dump truck with a front loader.  REALLY?  Theo inflated quite a bit but stayed with me since I was absolutely not letting go of that left rein and letting him get out that left shoulder.  Nuh uh.  The bell rang and I sent his distracted, nervous butt into the ring.

He surprised me.  As soon as we hit center line, he quit trying to dance around and stare at the construction.  He was all business once we started our test.  My music started and I started grinning.  I really have been waiting a long time to do this and my pony was right with me.  Didn't even get sticky on his leg yields.  It probably helps that once we were going along, I wasn't nervous anymore.  I was thinking about my music, my routine, and how much fun we were having.

We finished and I gave him a hug and tried not to start crying in the middle of the ring.  I was so proud of him.  Theo strolled out on the buckle, ears relaxed and looking for the lady with the mints again.  I threw him back in his stall for a break and went to get my score.  70.5.  From an S judge.  Yeah, I totally teared up. 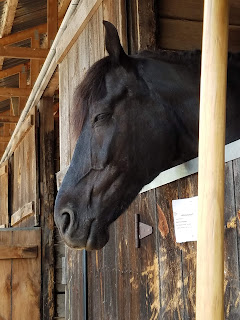 Unfortunately I left everything in the ring on that first test.  When I brought him up for his First 3 test he was dragging a bit.  Pony wanted a nap and I had no interest in pushing any of the buttons that would wake him up.  He had to march in one more time and with a judge break after our test, there was no one in the area.  Rather than tickle him a bit and wake him up, I let him doze and walked around the ring on the buckle.  No surprise, our test was obedient, smooth, and flat.  The comments were obedient but needed more elasticity and more ground cover.  Yup, we did, but I was focused on keeping all four on the floor.  62.2.  Hey, that's the score I needed, so works for me! 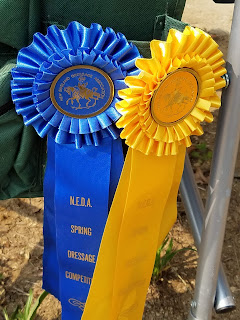 Theo is doing better in his stall today.  I took him out for his last handwalk at 8pm and he was okay with going back into his stall with a fresh pile of hay. 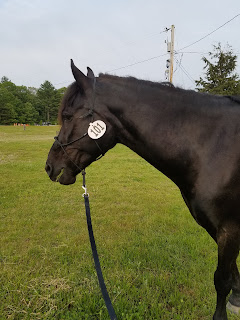 I did a bit of shopping, then went back to my hotel. 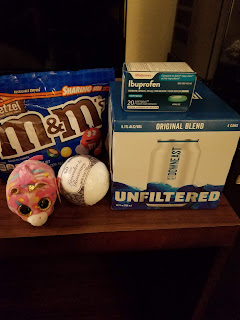 Used the bath bomb, now I'm curled up with my M&Ms and cider.  The tiny unicorn was just adorable.

Tomorrow we do the same thing, same ring, so I will try to be brave and light my pony up a bit.  He can do big boy gaits, I just have to be brave enough to ask for them.