The best part about sending Theo to Trainer Z is that she already knows him.  She was there the time Theo leapt straight up into the air and damn near cleared the warm up ring at GMHA.  She's watched him dance the dance of his people while learning his changes.  She's seen Theo at his absolute 'I don't want to be on this horse' worst.  Unlike a lot of other people that haven't seen that and think I'm exaggerating about the potential chaos with my lazy horse, she knows what he can do and respects the fact that he is actually quite athletic.  When he decides it's worth the caloric expenditure.

She also knows Theo as an individual.  He's a simple enough creature, he just needs to feel like things are fair and that he's going to be rewarded for hard work.  Hard work is fine so long as there are cookies involved.  Once he trusts his rider, he doesn't want to hurt them or drop them.  He'll at least try to keep them on top when he inevitably flips his lid.  Because Theo's gotta Theo.

Wisely, Trainer Z decided to spend her first 2 weeks with Theo just making friends.  She's been working him on the lunge every other day to work on him pushing back to front and getting him used to the fact that his vacation is over.  In the saddle it's been long, low, and leg yields with lots of rewards for effort.  It appears he remembers Trainer Z and associates her with good things.  And sugar cubes.

Unfortunately I did a lot of work desensitizing Theo to things on the ground like flags and whips.  Poor Trainer Z has discovered he has zero fear of the lunge whip.  This level of desensitization is great for assisting things like a piaffe or doing other ground work, a total pain for getting his out of shape keister back into work on the lunge.  Trainer Z is on Theo's trusted list so the biggest reaction she gets is a bit of a tail flick.  It sounds like he's been making her work very hard while lunging. 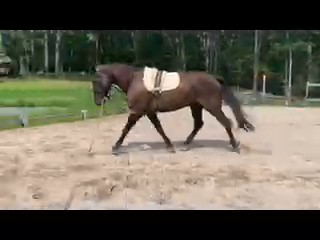 Potato vision screenshot from video sent to my phone but you can get the idea, mi papi is doing good work

She's going to start cantering under saddle this week.  Based on our previous five falls spent together, she's got about four weeks to get him on a regular schedule before Theo's patented equinox flailing time begins.  That's when the heat breaks and he loses his marbles for about a week before settling back into being his usual self.

For now, he's settled in like he's always been there.  He loves his paddock and run in with company all around and all day hay.  He has been very good for grooming and bath time because he does love his pampering.  He's already getting his grain upped as he starts to rebuild that muscle.  He's gotten used to the outdoor ring and no longer thinks that the various buildings and log walls are full of aliens looking to abduct him.  He wears his embarrassing giraffe fly sheet even though the other stallions can see him.  I can hear him whining 'MOOOOM' all the way at my house.

Since most of Trainer Z's dance card right now includes 3 - 5 year old warmbloods (including two toddler stallions) getting started in their high end dressage careers, I suspect Theo is a nice break in her day.  After several very athletic babies, having a senior citizen that already knows the moves and would rather take a break at any opportunity should be a nice change of pace.  Fingers crossed that Theo doesn't decide to show all those babies how it's really done once the heat breaks.