So how is Theo doing? 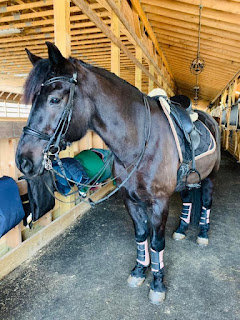 He seems to think he's awfully fancy.  Hanging out with all his fancy WB friends is a good influence. 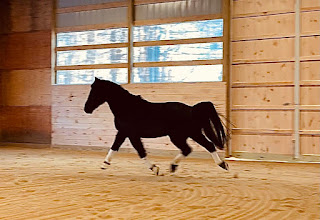 Don't tell him he looks a bit ridiculous trying to keep up with the four year old stallions.  He thinks he's utterly magnificent and I'm just impressed he's got all four off the floor and some actual elevation.  Trainer Z appears to have pushed through the wall and gotten to the wonderful, sweet, hard working core of Theo.  He thrives as a show horse in training since that's lots of exercise, attention, and puzzles for him to solve.  Also all he can eat hay in the form of a large bale in his paddock.

In a lot of ways, Trainer Z is going through all the stages I went through in six years, but she's doing it in six months.  Like some sort of fast forward montage.

They had a rough period in the fall.  There were a couple 'incidents' and he got a week off because the changing weather appeared to have disconnected his brain.  I don't remember what Trainer Z said but we swapped his supplements and treated him for a potential ulcer flare up.  Bingo.  He stopped kicking at his fancy new stall and stopped offering to lose his shit under saddle.  About the same time Trainer Z managed to get his hind end connected to his front end and give all that excess energy a place to go.  Like a light switch, he was back with the program.  By January, he was lifting his back and a happy participant again. 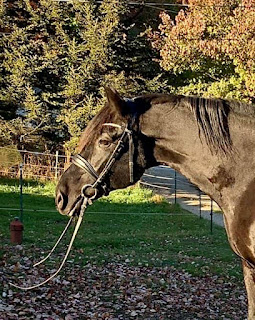 Now he's back in his double and schooling Third.  He's muscled up enough that Trainer Z's saddle fits him again which is great to see.  Counter canter is back on board so the changes are on the agenda.  Trainer Z is even talking about shows for him come spring since he's so completely with the program.  Third in 2022 and then who knows?  His strengths are really in collection and balance exercises so if he decides flying changes aren't a big deal, he might even touch Fourth one day.

As he refreshes his buttons and we manage his tummy, I still hope that he'll find a partner that he can cart around the shows and show them the ropes.  It's not a big deal, he's quite happy with Trainer Z, but I would love to watch him share all that he's learned.  However, that might not be for a couple more years.  He's gotten a few gray hairs but otherwise, he's pretty sure he's a four year old stallion.  Not quite ready to be a chill school master. 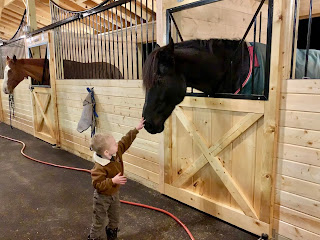 But one day.  He does like the tiny ones.