Second day of competition had me doing another Second level test and my freestyle.  It was a pretty big freestyle day with multiple classes.  Sound checks started Friday night and kept going between classes right through to the lunch break as Freestyle was starting. 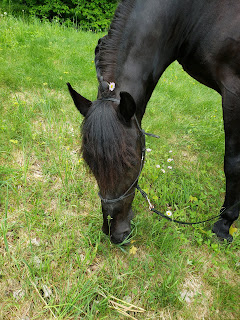 Some of my friends thought Theo needed some extra decoration

I was assigned a 10:06am soundcheck and dropped off my disc with the secretary.  I had somehow wrapped my head around the idea that my Second level test was after the freestyle and only realized I had a 10:53am test at 9:23am.  Theo was not groomed or braided and had enjoyed a big roll during his morning handwalk.  UGH.  I slammed his braids in while Trainer A got him cleaned up.  I made it to soundcheck on time, wearing my show clothes and with my tacked up pony following along.

The very nice young lady running the music asked for my disc and I said she already had it, I turned it in the night before.  Nope, she didn't have it.  I hustled off to the secretary who gave me a disdainful look and announced she'd sent all the music down already.  Yes, they lost my music.  I fortunately travel with a back up and ran like a demon to Barn C to retrieve it from my trunk.  I then ran all the way back to the sound booth (in my riding boots) to hand it over.  I listened to my music, had them turn the volume down a couple times, and then hustled off to make it to warm up for my Second level test.

I swung on Theo and he felt lit up.  I quickly realized I had a situation and chucked my whip.  I asked for a canter and he tried to blow his top.  It was a very crowded warm up and I wanted to keep a lid on the situation, but he had decided that he was a fire breathing dragon that didn't understand half halts.  Or whole halts for that matter.  His second jump buck combo was apparently very athletic and rather frightening for my friends on the side lines.  It didn't rattle me much because there was no spin, he wasn't trying to ditch me, but it didn't bode well for the test in front of the judge that gave me a 60% at First. 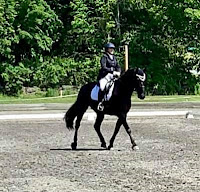 Lo and behold, I heard Trainer Z behind me.  She'd come over to see my ride and started calling orders for me to get the situation back under control.  Shorten your reins, put on your leg, and do transitions until he stops being over reactive.  Haunches in, shoulder in, make him accept your leg.  I managed to get Theo mostly under wraps and took him in for his test.


There were things I liked.  He was going forward, the circles were nice, and he behaved himself through large parts of the test.  We had one big blow up but it was contained to a single movement.  I didn't push him down to his First level frame and didn't try to squash the energy.  Trainer Z was happy to see me be brave and keep him up rather than shutting him down.  She'd predicted we'd have rides like this as we progress.  We spent months jazzing him up and now we're letting it out in strange arenas.  Sometimes it's going to boil over.

I did not at all enjoy him blowing his top, ignoring half halts, or feeling like I didn't dare ask for a real medium, but it was a good learning experience for both of us as he ups his energy levels.  This energy level is much more appropriate to Second.  Let's just say I don't have to kick in the canter these days.  Everyone has a bad test sometimes.  We were tense and distracted, he thought my input was unnecessary and locked me out of the bridle at times, but we got it done with minimal drama and some movements that were actually good. 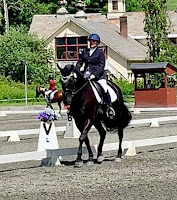 I got a 55% and a very clear message that this judge thought we had no business at Second.  Not much of a surprise when she didn't think we were ready for First the day before and that test didn't include airs above the ground.  It wasn't just the 'creative' canter work.  Every trot movement got a 5.5 or lower and we got a 5 for submission.  OUCH.  Well, 2 out of 3 judges think we're ready for Second and the one that doesn't think we're ready is the most junior, so I'm not going back to First.  If she was the only feedback I got from the weekend, I'd be crushed.  When she is the minority voice, I'm better able to shake off the bad ride.  That's all it was, a bad ride.

I decided that I should get on early and work Theo down before the freestyle.  He doesn't need that level of energy for a First level test and a blow up in a freestyle is disaster.  You end up off from your music and it's hard to get back on track.  I hopped on an hour before our test and started walking to warm up.  He flipped out for unknown reasons and started flying backwards.  I jumped off of him and told a friend to meet me at the lunging area with my lunge line.  I'm not sitting through that nonsense.

Theo put on a fifteen minute display of rears, bucks, and scoots.  It was so ridiculous.  At the point he reared straight up, I realized I had made the only safe choice and that I might be scratching my freestyle.

After the nonsense he started trotting around like normal, licking and chewing.  I jumped on and headed to warm up without giving him a chance to recharge.  Another fifteen minutes of trot and canter under saddle seemed to have his brain firmly between his ears again.  Just barely in time for us to head in as the first test after the lunch break.  Theo was still scooting a bit and jumped at some dumb things like the judge's bell, but he hit centerline like a pro.


Please ignore the commentary from my friends, I'm very appreciative they took this video for me

68.5% and third place behind two pros that scored in the mid-seventies.  I had so much fun with my freestyle.  My music is great and lots of people react to it positively.  At this point, the actual test is easy for us and we can enjoy it.  We bobbled our medium walk due to his higher energy levels and one of our circles was straight up wonky due to me losing my starting point, but otherwise it was solid.  So proud of the second canter lengthening.  We still have bracing in the leg yields but it's getting better.  I was able to get him back and the crossing was good.  If I could get him to not go above the bit the second I ask to go sideways, they could really be a highlight.

We had the same judge from our last show at B and we got a 69.3% from her.  Lost 1% due to increased tension (and a wonky circle) but that's fine.  The judge at C was less sold on our music and we got a 67.6%.  It was really the only place where their scores differed.  I knew the pop music with lyrics was a risk so it doesn't bother me.  Choreography continues to be a solid score for us and since it's x4, it's important.  Harmony is also a very consistent score for us.  What can I say, we generally get along and he looks happy to be there.

After a long day, Theo was happy to go cuddle up in his stall while I sat on the hill and watched the FEI freestyles.  After the show was over, my friends hosted a taco night followed by s'mores.  Showing with friends is a lot more fun than showing alone. 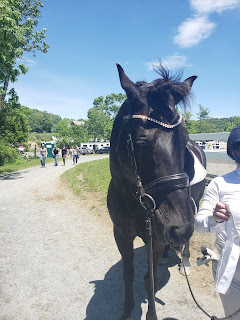 The forecast showed 100% chance of rain for Sunday and I saw that I had the same judge for Second 1 yet again.  I'm not planning on selling Theo, but there's no need to go back in front of a judge that really does not think we're ready for the level and put another mid-fifties score on his record.  I'm all about doing tests for practice, but not in the rain after Theo's been in a stall for three nights.  I decided that I would just scratch that last test.

And then I got clobbered in the head with a board so it was moot, but at least I didn't miss any tests I expected to run.  My friends packed us up and got Theo home.  Unfortunately that means both of my music discs are gone and I need to make new ones before our next outing.  Gross.