Last night, after my first ride back, I was on pins and needles hoping I wouldn't feel pins and needles.  My back did get sore and I was in a panic, but some Alleve and a Salon Pas patch was all I needed.  And it was in a different spot than when I'd hurt my back.  Not riding for three weeks did leave me with a couple of sore spots after going back.  The stabilizers for my ankles were sore as well, since I apparently don't use those when running.

I got up this morning and was relieved to have no pain.  A little tight in the lower back, but that's not a surprise.  I headed to my lesson with a back brace on to see how I ride with that.  I also got to debut Theo's new boots. 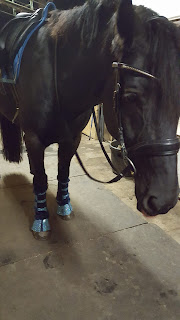 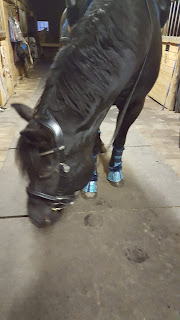 Yes, they are glittery.  We found them at a tack shop during an adult ladies outing.  When I saw that they had front, back, AND bell boots that matched a saddle pad I have and were in his size?  They had to come home with me.

Trainer A was . . . well, she's gotten used to me at this point.  There were some sighs, but I've done worse. She still hates my hearts saddle pad more.

My lesson went well.  I definitely struggle with following in the back brace, so I'm hoping it's not something I need going forward.  I posted for most of this lesson, but did sit the canter.  I was guarding myself too much to sit the trot well and we don't want to block his forward.  I only sat for the lateral stuff where I just can't freaking manage all those body parts without my bum in the saddle.

With his hocks straightened out, we're full steam ahead on building a light, uphill canter with self carriage.  Today we started with shoulder in on the quarter line at the trot, making sure that he kept the forward while wrapping around my inside leg.  He likes to suck back, but he's getting the idea that he can stretch in the movement.  It's just a matter of confidence.

Then we swapped to cantering.  Pick up the canter, cut across the diagonal so we are counter cantering, then leg yield off the wall to the quarter line.  Swap leads, repeat.  Poor Theo, there was smoke coming out of his ears.  This is going to be our fight this winter.  We do things in walk and trot.  Canter?  We just canter, we don't actually do things.  He almost tripped over his own feet when he realized I wanted him to give me a real, leg crossing leg yield while cantering.  And all the counter canter work.  His counter canter has gotten very steady and he held it without any real resistance, so that's a big victory.  We don't do square turns yet, but we can go all around the ring without him inverting or trying to break.  He's comfortable with it and starting to push into the land of confirmed.

He was stressed enough with this new, confusing exercise that we rewarded heavily.  It was straight up clicker training with a big release and a cookie when he stepped off the wall without bracing or dramatics.  It was walk to canter, canter the diagonal, a neck scritch for holding the counter canter on the short side, the leg yield on the long side, verbal click followed by halting for a treat.  A couple iterations of that and he was stepping off with no protests.  Each pass I'd ask for a couple more steps until we were making it to the quarter line.  I'll probably do one more session of rewarding every pass before I start to wean him off.  It's mentally challenging for him right now and I want him to stay light and positive about it.  It's not difficult physically, but he didn't expect it.

I think we'll be doing canter leg yields for awhile as we start getting the shoulder in and half pass at the canter started.  He needs to figure out that laterals are a thing at all three gaits.  It will also help us build a real collected canter without me getting in his face.  He'll sit down because it's the only way to free up his front end and go sideways.  Even our limited work today got his shoulders up more as he realized he had to do more than canter in a straight line.  He also had to halt promptly for those cookies.


Salon Pas patch is on my tight lower back but no sign of the nerve pain or pulled muscle, so I'm mentally feeling better.  Tomorrow his adult rider will have her flat lesson on him and I'll be resting my back.  She's learning about adjusting Theo and managing his tendency to fake a contact while bracing on the underside of his neck, so he'll be doing a lot of long and low while she learns what it feels like when he lifts his topline.  Gradually she'll learn how to bring him up without losing that lift.

Sunday is my half marathon.  Bib pick up is today. 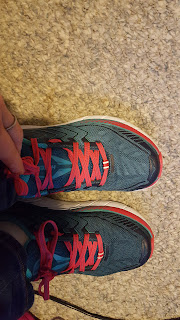 I might be a bit nervous about that.
Posted by Catie at 9:03 AM No comments:

Back to your regularly scheduled program

Where have I been?  Not riding. 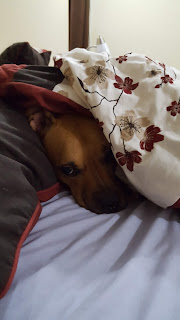 The cause of my time off

I managed to throw my back out twisting to pick up a dog toy.  Seriously, I twisted to get a dog toy out from underneath the coffee table and pop, my back was out.  I didn't think it was a big deal, I tweak my back pretty regularly, but this was different.  By the next morning I had nerve pain running down my right leg.  Normally riding helps when I tweak my back. It encourages me to stretch and move tight muscles.  This time?  It crippled me.  I was in a chair after my lesson and didn't dare move.  It took days before I was moving around regularly.

I stumbled onto a solution purely by chance.  I had a gathering to attend and I couldn't miss it.  I slapped a lidocaine patch on to manage the nerve pain and got out of my chair.  With the nerve pain numbed out I moved around in a pretty normal fashion.  I thought I was going to be dying the next day after all that moving around but it was actually better.  I slowly added my running back in and sure enough, my nerve and back pain resolved.  After two weeks, I felt normal again and even completed my last long run for my half marathon, but I didn't ride at all.

I was scared.  That pain was very scary.  I thought I had herniated a disc and if you want terrifying, google herniated disc and horseback riding.  By the time I was done reading, I thought my entire riding career was over.  The nerve pain, at it's worst, was all the way down to my foot.  I was visibly limping for days.  I was sitting at the office with a heating pad, lumbar support, and a timer going off to make sure I got up and walked twice an hour.

I did horse owner things while I was recovering, just didn't ride.  Theo had a visit from the chiropractor.  He got good grades for the most part.  His pelvis was uneven again and needed to be straightened out and his stifles are a bit stiff, but his SI tested out a-okay and nothing else was seriously out.  I'm going to call the vet and get his stifles done just to be a good (aka paranoid) horse mom, but he is in great shape.

I clipped him once my back was pain free so I could bend over. 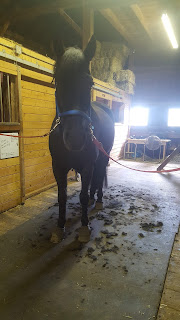 Trainer A and his adult rider kept him in work for me.  He also subbed in for some lessons, torturing teenagers that aren't used to horses that need a very forward ride.  Apparently he had a lunge line lesson with one teen that spent the whole lesson being humbled when she couldn't get him to canter more than five strides.  Not as easy as he looks, huh?

Today his farrier came out and got his toes all trimmed up and lovely.  And tonight, I finally got back on.  After almost three weeks off.  No sitting trot, light seat in the canter, but I gave him a good work out for 30 minutes.  He loves to fake the connection and brace the underside of his neck with less experienced riders.  I played with the frame, bringing him up and then having him stretch all the way down while doing transitions.  He finally picked up his back and used his topline like he's supposed to.  He's chubby and lost some muscle tone, but he seemed very happy to be back at it.

I felt fine riding, we'll see in the morning if there's any problems.  My fingers are crossed.  Hopefully it was a fluke, a case of the perfect muscle going into spasm and impinging the nerve.  I'm not ready to swap to gaited dressage.
Posted by Catie at 6:54 PM 1 comment: