Cervical spondylosis and an indefinite hiatus

I really, really thought I was getting back in the saddle.  But a long delayed neurology consultation has brought that process to a screeching halt. 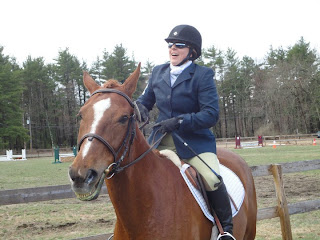 My horses have always brought me so much joy

Way back in the winter I went to my PCP because I was concerned about some pins and needles problems in my hands and feet.  Fleeting, not impacting my life, but it was unnerving.  While I was there, he observed a twitch that I'd developed but had been attributed to my anxiety by my previous doctor.  It was the first time a medical professional actually saw the way my head will occasionally tic the the side all on it's own.  My little 'tic' went from anxiety quirk to real problem very suddenly.  I wasn't concerned, surely it was anxiety.  Wouldn't there be something other than a tic if I had a real problem? 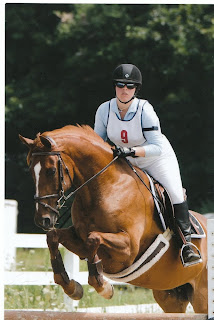 Best picture of me on a horse ever taken, of course it was with my princess

I went to my consultation and got a pretty thorough examination.  My balance and coordination were overall given an A.  I had a bit of trouble with the 'touch my finger touch your nose' test but I could do it.  Just took me a second to convince my hand to hit the small target.  And he noted my range of motion in my neck is limited.  I shrugged.  No pain, my chiro has taken care of any pain and already told me that I have some bony changes.

He immediately said I was going to go get an MRI of my neck.  Apparently my little 'tic' is actually neurological.  My many years of being lawn darted by naughty ponies is coming home to roost.  My chiro mentioned that my neck was pretty screwy after she took an x-ray but I wasn't actually concerned because I had no pain.  I went to her for my SI pain (which she got completely under control) and I only noticed a difference in my neck when my sleep improved.  Apparently my neck is a bit of a big deal.  A very big deal. 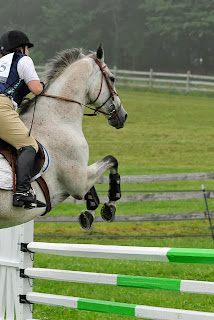 The meathead taking me around my Training level eventing debut

Here's where it gets hard.  I need to avoid irritating my neck while my chiro gets things under control.  She's made a lot of progress while I've been on my riding vacation.  She's not exactly eager for me to go back to beating my spine up by sitting trot.  My neurologist is throwing a flag on the play because I really shouldn't be taking a blow to the head and neck.  Theo is wonderful but he's got a mother of a spin.  It would be very easy for me to have a violent interaction with the ground.  The word 'paralysis' was brought up.  I really, really don't want to be paralyzed. 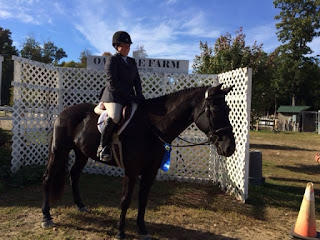 Mi papi has always been a handsome dude

Theo is going to be heading to a new barn near Trainer D.  She will be keeping him happy and in work.  He's really bonded with her and she loves him.  He will, frankly, not miss me a bit.  He's got a very nice lady that sees him five times a week and thinks he hung the moon.  He'll teach some kids to jump and some nervous ladies to canter.  Trainer D wants to take him to some shows and I can play the part of supportive owner.  I'll wear a sun dress and a big hat. 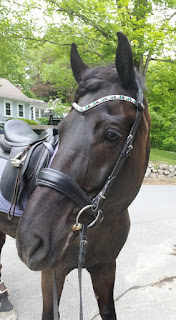 As for me?  I'll keep running (approved activity) and road cycling (approved activity).  I'm allowed to do some mountain biking but I need to buy a neck brace in case of unplanned dismounts.  Full suspension bike is actually pretty easy on the neck and the chiro would rather have me on the mountain bike where I'm more upright.  Neurologist is a mountain bike rider himself and thinks the road is better for avoiding dumb crashes but the neck brace is a solid compromise.  It's almost like he knows what I'm going to do while I'm goofing around on trails . . . 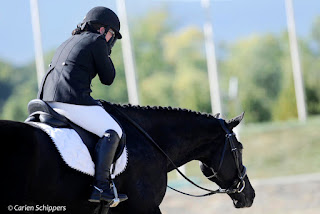 I'm heart broken, no lie.  It's been very difficult for me to accept this.  Will I get back in the saddle in the future?  I don't know.  Posting trot and cantering out of the saddle are not a problem and Theo is settling with age.  It's quite possible you'll see us in the future doing 2' hunter courses with my fanny never really touching the saddle.  My chiro is feeling good about my progress and doesn't think I'll be so limited in the future.  If he completes his transition to perfect school master, he'll be perfect for letting me put my foot in the stirrup again.  But that's not today.  Today, I am starting to pack up his gear and bringing my dressage gear home. 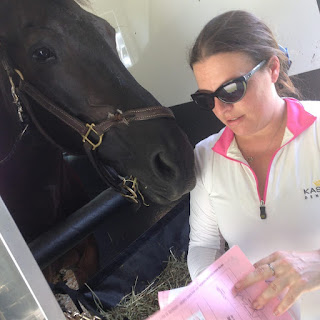 Reviewing our tests at a show

This wasn't the ending I'd planned for my dressage career but we achieved so much, I can't be too disappointed.  I certainly won't throw myself into a desperate attempt at getting those last scores at the risk of more neurological damage.  I'm only 41.  I have a lot of years to plan for and if I play my cards right now, those years will be pain-free and active. 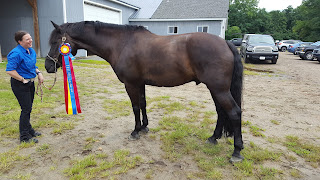 So the blog will probably be on indefinite hiatus as it's a horse blog and I won't be in the saddle.  I expect to post the occasional update and if Theo goes to a show, I will definitely post pictures.  Maybe, one day, I'll get the green light and you'll see pictures of me in the saddle again. 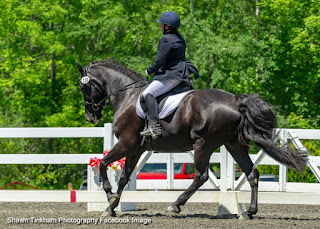 Until then, give your ponies a hug and enjoy any chance to get in the saddle.
Posted by Catie at 8:59 PM 7 comments: