What is it about Marshfield?  Completely civilized experienced show horses suddenly flip their tiny lids and commence with screaming and flailing.  Including Theo. 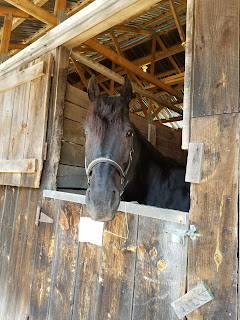 So much for him being experienced and ready to go after his outing at the Big E grounds.  There's something about the walk from stabling up to the rings that makes all of the horses certain they are going to be tortured and killed.  They need help!  They need friends!  They need to scream and spin for home!  Even Theo who generally doesn't care who's around so long as he's not alone.  He was calling for his Friesian neighbor and spinning every time he got a response.  I walked him in hand for an hour.  With his rope halter due to his inability to deal with himself.  He was actually doing really well, but every time he went to stabling his brain broke again.

I went to get on and realized Theo was unrideable.  Completely lit, explosive, actively looking for a shot to explode.  He started to spin and fly backwards and I got the hell off.  I borrowed a lunge line from my neighbor and he spent a full thirty minutes cantering.  A little trotting, but it was pretty much all cantering.  He'd start to look tired but I'd move or shake the whip and he'd start with the head snaking and scooting again.  I didn't let him stop until he was actively trying to stop.  Then I got on and went back to the competition rings.

Like magic the brain worked!  He was rideable!  Sweat truly is the brain's lubricant.  I sent him right down centerline so he understood the game when we got there, but after doing yet another 30 minutes of work, he was ready to mosey around on the buckle.  That shivering skin was gone.  I did dismount for the walk back since he had to pass his Friesian friend who was having his turn flailing on the lunge line. 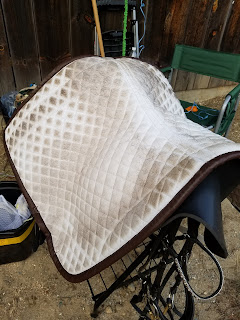 Almost three hours of work to get Theo through ring acclimatization.  I was exhausted and I'd worked right through lunch.  I was starving and so utterly done with the horse show.  I went to my sound check and that went fine, then took off for my hotel to check in.

The hotel had the expiration date of my card wrong in their file and it took 45 minutes and a phone call to my bank to get it all sorted.  I didn't get my dinner until after night check. 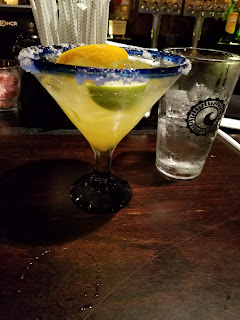 It was a well earned margarita with a rib eye steak.  The salad I got was the best tasting thing I've ever eaten.  That's how you know I was starving, I woofed down a salad.

Tomorrow's plan is to handwalk in the morning when I get there, then school for an hour once the warm up rings are buzzing so he's not alone up there.  I ride at 1:30 and 3:30, so he'll get some nice breaks but it's going to be all about keeping the energy levels down to the point I can actually ride him.  And hope that all of his neighbors stop screaming for each other.  Seriously, what is it with this place?