People know who I am now.  I guess that was coming with a horse named Expect the Unexpected.  He got it for such an icky reason, but now people think it's because he's such a fun horse in a very sleepy package.  They also know me as the one that travels alone.  No groom, no entourage, no trainer.  I'm there 13 hours a day keeping my heathen as happy as possible with unending hand walks, feeding, mucking, and grooming.  I eat breakfast and lunch next to his stall since he'll settle if I sit down and he knows I'm staying put for awhile. 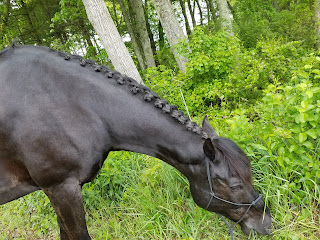 Today started at 3am technically.  That's when the fire alarm went off in my hotel.  No evacuation needed, someone burned a cup of noodles in the microwave, but that is not a fun way to wake up.

Theo was in relatively good form when I got there and I stuck to just hand walking.  No lunging today.  The deep footing was eating away his energy and he needed to keep some for the ring.  When I went up for my warm up, he was a bit buzzy and distracted.  Buzzy enough to spook badly at the watering truck and have a spin/buck fit.  He smashed my phone that I forgot was in my back pocket, so I'll be getting a new phone.  Bad, Theo. 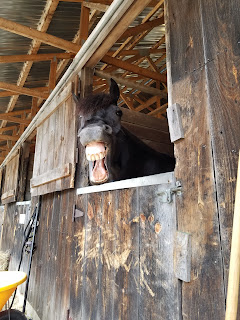 The freestyle didn't go quite as smoothly.  Because Theo was more distracted and on edge, I had to ease the first canter transition which put me behind my music.  I ended up going for my back up plan which is a canter lengthen on quarter line instead of on the rail.  I pulled it off and managed to get back with my music.  No one seemed to notice.  Score one for having a back up plan!  Got a 70.3 from a different judge so I think I'm really on to something with this freestyle.

The ladies in the office were after me to start budgeting for a trip to nationals with scores like that.  I must have looked like a stranded fish, standing there with my mouth working and no sound coming out.  Who, me?  Go to nationals?  But the girl is no one!  But if I keep scoring 70's . . .  They were quite insistent and promised to bug me again at the summer show.

Theo was dragging his tush when I went in for his First 3 test, but he picked up and marched well for me.  I was practically carrying him down that final centerline but I must have masked it well.  We got a 68 with comments about how obedient, harmonious, and easy the test looked.  But we need to cover more ground and have greater suspension.  Pony was exhausted, so I'll take the 6.5 for impulsion. 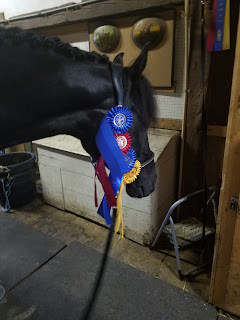 4 tests, 4 qualifying scores for regionals.  And just like that, we're qualified.  I can play at Second level for the rest of the season and  not worry about collecting scores anymore.  That's an amazing feeling.

Except now I have to sit the trot in competition.  Two weeks until our Second Level debut!