I am back from my show.  GMHA is such a lovely break from technology, but it's not ideal for writing up blog posts.  I'll do the full review of how my weekend went as the week goes by.  It was good (62% in my Second 1 debut and a third in a big freestyle class!), it was bad (55% due to airs above the ground in another test), and it was ugly. 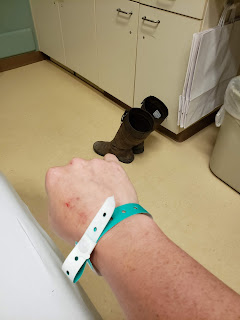 My boots made a mess of their nice, clean floor

I have to get through the ugly part right now.  I did something so fundamentally stupid that I look at past self and wonder just how tired and fried I was. Fourth day of the show so pretty darn exhausted.  I'd already decided to scratch my last test due to the judge in that ring really not liking us (a 60 at First level?  Ouch.) and the forecasted steady rain.  I'd rather not get another lousy score while in the pouring rain.  I tossed Theo his breakfast, freshened up his water, and started prepping for departure.  He was absolutely filthy so I wanted to brush him.  It's dark in his stall, so I took him out to park next to his OTTB neighbor at the rail that winds around the barn.

I know it's not a secure place to tie, but the visual is usually enough for Theo especially with company.  Wrap the line around loosely and he stands.  He proceeded to wander off several times.  I kept putting it back, gave it an extra wrap, told him to stop playing with it, etc.  He spooked at something, pulled back sharply, and the damn lead line locked rather than slide loose.  It was my new betathane lead and it stuck to itself when it crossed over itself.  I must have been more tired than I thought to not notice that happening between Theo and I moving it.  It must have been when I tried to tuck the tail away from him so he'd quit sucking it in like spaghetti.  I had enough time to think 'oh fuck' before he yanked the board off and hit me with it on his way back to his stall that was fortunately right behind him.

Theo is fine.  He's got a scrape behind one ear from his halter.  He's sound.  My neighbor was able to grab him as he tried to get in his stall, unclip his lead, and he let himself in.  But all reports, he is none the worse for wear and is trotting off sound.

I, on the other hand, was on the ground in the ditch.  EMT was called, accident reports were filed, and I was sent to the hospital with Trainer A due to head trauma and potential concussion.  I was also bleeding.  I never lost consciousness, no headache, and completely coherent.  Remembered all my stats for the forms, etc.  Once we got to ER, I rattled off all my stats for them and apparently impressed them enough that I didn't even get an X-ray.  I did, however, have to get the 2cm cut on my head closed up.

They used this fascinating technique using my hair to do it since I'm so needle phobic (my Fitbit says my pulse hit 185 when they said it needed to be closed up).  They actually knotted my hair over the cut, then used Dermabond (superglue) to close it all up.  No needles, no staples.  Just four knots in my hair with some glue.  I have a picture of the end result, but there's some blood so I'll spare everyone (if you're really curious I can share it).  I'm affectionately referring to it as my macrame.  Apparently it's a technique for kids that are freaking over staples and I was lucky enough to have a very senior nurse that knew the technique.  I also have a cut behind my right ear and I'm bruised to kingdom come from my right hand up to the top of my head, but overall very lucky.

Of course the whole thing is the only thing anyone in that barn is talking about right now.  I was an outcast before, this is going to be worse.  I was stabled between two very high end barns.  I'm now known as the idiot that tied her horse to a board and then got clobbered with it.  Apparently my neighbors were all very happy to discuss it at length with my friends when they went to retrieve Theo for me. 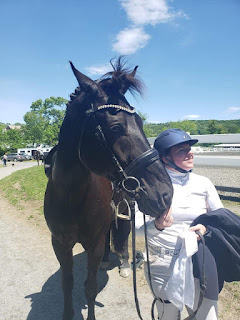 We already stuck out a bit

35 years with horses.  I know better.  I needed to have him tied at the post, not the rail.  His halter would have snapped if he'd hit the post.  But I just parked him next to the OTTB with my tired brain saying 'you're not tying him'.  And I didn't mean to be.  Especially with him getting loose every time I turned my back, him getting stuck was not my concern.  But somehow I got that lead line crossed under itself and boom, disaster.  I'm going to be mad at myself for this mistake for a long, long time.  Especially when I've taught so many people how to properly tie in that situation.  I put my horse and a lot of other horses in danger.

But Theo's fine.  His vet will be out to double check and his massage therapist is already scheduled.  He loaded like a champ for everyone and is safely in his field.  I'll see him in a couple days once my swollen ear and goose egg are down enough I can get my helmet on again.  We were heading into our summer break anyway.  Just a western show on June 30, then summer camp time.

It'll take me that long to get up the guts to be seen at a dressage show again.
Posted by Catie at 4:37 PM