As promised, here's the video of me and Ruby bouncing about at Novice. Have to say, for having only ridden the horse one time before this, that round certainly doesn't look bad. We had to stop and regroup after the two stride because she got strung out, but otherwise, not too shabby.

Horses are certainly a life style. It's not something that you go and do and then put out of your mind. It's something that follows you, haunts your footsteps and takes over your mind. It randomly hijacks your thoughts with images of galloping, jumping, and wondering what your horse is up to at that moment.

This weekend was dedicated to horses in a way that hasn't occurred since Fiona shipped out to Aiken. On Saturday I rode the Jumping Machine (aka Ruby), which was a nice day. It's therapeutic to go and spend a lot of time grooming, then have a nice jumping school. It was the first time I got a chance to ride Ruby and she was just as good as her reputation suggested. There's no horse in the barn that is more honest and loves jumping more than Ruby. She was a complete delight and left me grinning ear to ear. Of course, it's spring so she's doing just a bit of shedding. 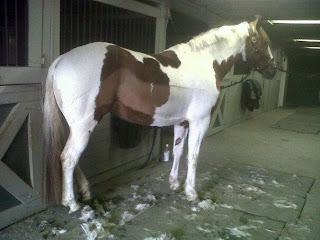 I could have knit another pony.

Today I rode in a Jump/Critique/Jump with Ruby at Novice. Video is pending, so that should be an interesting show. We actually did pretty well, all things considered. Ruby is having some issues with her right lead, and I was still getting used to her and her saddle (the judge commented about how it was pitching me forward), but Novice wasn't an issue. It was excellent for my confidence, to go hop around at that height. We got some sharp feedback, but it was all justified. Just difficult to hear when I've been out of practice jumping courses at that height.

I got home and checked the Live Scores to see how Fiona's weekend was going. I had to reload twice and go get my reading glasses to be sure of what I was seeing.

I feel like my world got tipped on it's side.

Of course it's possible. She's green, she's young, and horses will be horses. Today wasn't her day, all horses have bad days. I know this, but I'm still processing. I have complete faith in my trainer so I know this will be fixed. It's just a road bump, every horse has one. It's just more of a surprise when she's been so damn good. My trainer is taking her back to Paradise to school the course again Wednesday and then we'll decide whether or not the rest of her season will play out as planned.

You win some, you lose some. It's just worse when it's a complete surprise.
Posted by Catie at 5:49 PM 1 comment:

There's a lot to be said for saintly old men. My confidence takes a knock when I only jump once every other week, so it's a relief to have a pony I can really trust when my instructor starts to crank the jumps up.

Okay, crank the jumps up means maybe Novice, but it looks big when you're that close to the ground!

My anxiety was completely out of scale to the jumps, but with the mighty Dodge pony to carry me, I managed to get around despite my overwhelming urge to crawl up his neck and hang on to his ears. It's a bad habit I developed as a kid in the hunter ring and have never managed to lose. 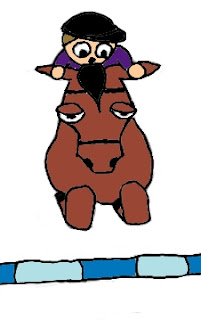 I love Dodger. He just ignored me and went over despite my hesitation and sometimes wiggly body. My previous lesson was on the draft cross Coco. This was the horse I was half leasing when I made the fateful decision to go horse shopping. I love that horse, he's sweet and honest as the day is long, but we're just not a personality match. Our styles clash so badly that it's not fun for either of us. Riding him made me long for my princess.

The princess has another horse trial this weekend, running at Beginner Novice again. Hopefully she'll build off her successful outing at the beginning of the month and continue to make my trainer happy. I hope my trainer is having fun with her, because I sure enjoy taking her cross country.

I'm counting the days until I see her again. Just a month to go!
Posted by Catie at 7:26 PM 2 comments: 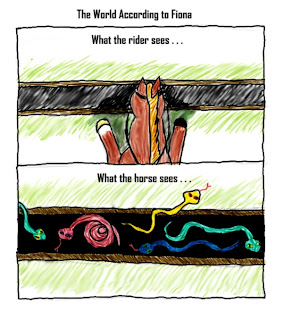 I honestly wish I never got this image in my head, because it turned out to be almost too much for my minimal artistic talents. I drew this several times trying to make it clear that the rider is looking down at a ditch. Finally figured out it needed a shadow under the horse. Shading? In my art? I just about died. But I think it came out cute, even if it has my pencil style coloring.
Posted by Catie at 1:55 PM 2 comments:

There have been a lot of videos about stuff horse people say.

There's even one about stuff eventers say.

But they missed a couple of my favorites, and being a fairly recent convert, I still notice these things.

How late are they running?
(walking cross country) Has anyone seen jump five?
Aren't you supposed to be in the ring in five minutes?
Anyone know how to make my air vest work?
Anyone have that tool for my air vest?
(Combined with wincing) Oh. OH. Smart horse, good boy.
How's the footing after the water?
The cross country just wasn't challenging enough for him.
That's okay, we'll make it up in the other two phases.
That judge hates thoroughbreds.
That judge hates warmbloods.
That judge hates draft crosses.
Anyone checked the weather?
I didn't fall off, I forgot to unhook my air vest.
It was going great until she saw the jump judge in the blue poncho.
Oh my God are they serious?!
Hey, how many strides are you going for between six and seven?
Sit up and ride positively!
Except you, you slow down.
THANK YOU YOU'RE SUCH A GOOD HORSE I LOVE YOU!

Speaking of which, the princess had her first sanctioned event with my trainer in the irons. She got a 34.0 in dressage.

That's about 8 points lower than her last outing. I'm just throwing a party over that, and my trainer thinks there's an even better test in there if we can just figure out how to keep her focused in the dressage ring. She went clear (but a bit wild) in stadium and handled the bending lines well. She also went fast and clear in cross country. Optimum time was 4:23, she did it in 3:58, and that was with my trainer trotting some fences and really trying to slow down. It earned her a sixth place ribbon out of seventeen horses. Seventeen horses, and a number of them with professionals in the saddle! I'm so, so proud of her, there are no words.

Now I don't have an excuse for coming in last place in dressage anymore. Hmph.
Posted by Catie at 1:49 PM No comments: