A picture is worth a thousand words

Yesterday I had the princess out for a cross country school. We were doing just about everything you would see on a Beginner Novice course (good thing, since we're going BN on July 10 at our first recognized event). Ditches, up banks, down banks, water. She flew around like this was what she was born to do. We did have two stops, one for a bright red coop that she did not like at all, and the other for a spooky house that I did not ride well. Both times she circled right around and went after them without a question, so I consider that a victory. She just needs more miles. The place we took her to school has a lot more color and variety to their cross country fences than she's seen before, and we were asking her to do some bigger hills and questions, so she definitely proved herself to be an honest and brave young lady.

Exactly ten months before that cross country school, I unloaded a mare with terrible feet and no muscle from a trailer and tucked her into a stall. Even four months ago we couldn't get around a stadium course without scaring people, and had to trot all of our fences. Now? Totally different pony. 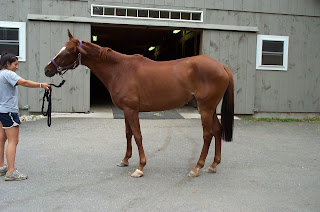 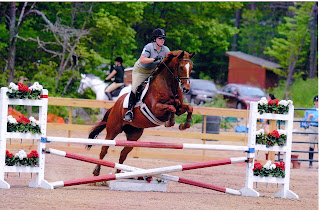 She has the best expression in that picture. Someone seems to be enjoying their job. My hands are getting better, but they're still drifting up a bit.

I'm going to go through major withdrawal this week, since I'm going out on my hiking trip so I won't see her. One of the girls at the barn is going to help keep her in work so she doesn't get bored. I'll have to buy the princess a new Likkit to make it up to her. She loves that thing.
Posted by Catie at 6:36 AM 1 comment:

A long time ago, at a stable far, far away, I dreamed of owning a Show Horse. Not a horse that you take to shows, but a Show Horse. I learned to ride at a barn primarily devoted to hunters in the 80's, so my vision of a show horse was tall, dark, and handsome. I wanted a tall, elegant, dark bay gelding. He would have a stall and blankets, because he would need to be kept inside at night and stay warm and clean. He would have an elegant canter that was easy to ride, and would always hit the distance. A Show Horse does not spook at hay bales and does not dump little girls into oxers because they may have peeked down just a little bit. A Show Horse makes people turn their heads when he walks by.

Of course, like many little girls, I had a pony. A ten hand Welsh pony named Terry that drove me bonkers for years. I fell off that pony more often than any mount since. Combined. He would stop, he would spin, he would duck out. He'd drag me off to eat grass, ignoring the fifty pounds of irate little girl trying to get him to go inside so she could tack up. I chased that pony all over the pony pasture in the pouring rain, shaking a feed bucket and wishing for that beautiful Show Horse.

Of course he was shaping the rider I would be one day. At the time I didn't appreciate it, but a lot of my riding can be attributed back to the little white monster that was my partner on and off for many of those formative years. I didn't appreciate him until the end of our partnership, when I was finally good enough to earn some respect. I still wanted my Show Horse, but in the mean time, I had a pretty darn nice pony, and some nice ribbons to show for it.

I now own a Show Horse. Sure, she's a chestnut mare, not a bay gelding, but she qualifies. She lives in a stall and has lots of blankets. She has an elegant canter and does hit most of her distances, so long as I don't screw her up too much. She doesn't spook at hay bales and she doesn't dump me in oxers (yet). And yes, she turns heads when she walks by.

I see the little girls struggling with their ponies in their formative years watching me with my Show Horse and I see the cycle starting again. They want a Show Horse. Some of them want my Show Horse. Fiona has a little fan club of girls that think she's super neat. It's kind of fun to think that some of them are dreaming of a tall, elegant chestnut mare of their very own one day, the way I used to dream of a tall, elegant bay gelding. But there's a secret and I don't know if I should tell them.

They're all ponies. Every. Single. One of them.

How do you tell them that they will always, always be dragged over to the best patch of grass around? That in the end, they're all ponies? I went out hacking with a friend. We were both riding our Show Horses. We both spent a fair bit of the hack convincing our mares to not eat every little thing that went by. Both of our mares made us feel like we were back to riding Shetland ponies that will just ignore that little girl and help themselves to all of that free food.

Maybe that's how the cycle really goes. It starts and ends with the ponies. There's no perfect Show Horse out there, just well trained ponies that happen to be taller, and when you realize that, you can really appreciate your partner's inner pony.
Posted by Catie at 10:16 AM No comments:

Another day, another horse show

Some of my friends are starting to think that horse shows are just an every day occurrence for me. Every time they turn around, I'm washing saddle pads, clipping, bathing, scrubbing tack, and in general putting hours worth of work into a five minute presentation in the ring. Ten, if there's two phases, 15 if there's three. Of course, the amount of prep work is directly related to the number of phases. An actual horse trial? Probably eight hours or more for those 15 minutes of glory.

Trying to explain why I spend this much time and money for a ribbon I could just order online baffles most of those friends and I've given up trying to explain it. You either get it, or you don't. Those that get it are with me at the barn prepping, those that don't have hobbies that are not so completely and utterly soul devouring. I could always take up stamp collecting. Certainly wouldn't have people holding their breath the way they do when I'm on course.

Our show wasn't our best performance. We've focused so much on fixing the stadium that the dressage slipped. We were rushed, and the princess pulled some stunts I've never seen before. She spooked on the way into the ring for out second test, I'm surprised the video didn't catch my laughter. I was extremely amused, but the scores just weren't good. Our stadium was much, much more rideable than she's ever been before. We had two rails, but that's pilot error. I'm burying her too close to the fences. I've been too occupied with avoiding flyers when she charges, I need to ease off and let her take a longer spot. Overall, proud of my girl as always.