Who's got two thumbs and a riding lesson for this Saturday? 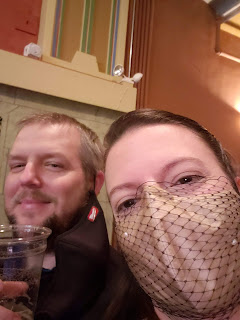 Me and the hubby at Beyond the Eats with Alton Brown.  I'm such a fangirl of his.

Yes, all my lovely readers, I get to ride Theo in a lesson!

It's not as exciting as it sounds.  It's more like a 20 minute pony ride with supervision but I'm excited.  Super, super excited.  I visited Theo last weekend to give him his spring shear.  I removed half a wheelbarrow worth of fuzz.  I'm not exaggerating, I had to use a wheelbarrow to clean up the hair.  I didn't get a picture but it was ankle deep on him.  I was up half the night sneezing up a small pony's worth of hair that I'd managed to inhale. 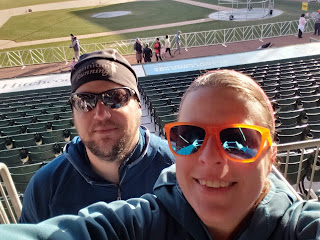 How about a picture of me and the hubby at a 5k instead of me sneezing up horse hair?

After clipping, I ended up hanging out and talking to some riders while watching some rides.  I had so much longing as others tacked up their horses and rode them and discussed their show season.  I wanted to ride my damn horse!  But I agreed with my husband (and my mom and the chiro and half the eastern seaboard) that I would not ride Theo without supervision.  By the time I left, I was knew I needed to message Trainer Z and try to set up a lesson time.  She was eager for me to have a lesson and booked me for 30 minutes on Saturday.

Now I have to find my stuff!  I last rode in June and it was all in my Western tack.  I had to actually order a new set of breeches (the Covid 15 is no joke).  I found my tall boots in the back of my closet and my helmet was hanging up near them.  It's supposed to be 46 degrees so a long sleeve shirt and a vest will round out the outfit.  All the rest of my gear is already there, waiting for me with my horse.  I may or may not have taken advantage of a discount code to get Theo a whole new set of gear in lotus pink from PS of Sweden . . . 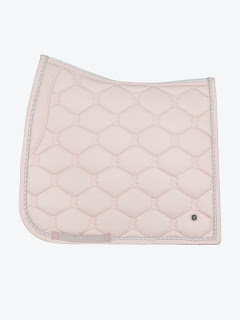 And yes, Theo is still mine in the ways that count.  We had a major make out session during his post clip groom.  He loves getting curried right after a clip.  Even my fantastic Haas curry comb can't get right to the skin when he's in his full winter coat.  I was grooming him, he was grooming me, it was like nothing changed.  He still comes when called, even with his buddies and his ridiculously large hay bale waiting for him.  I wormed him for Trainer Z since he's still easier for me to handle.

Oh, and he's still an asshole.  He apparently escaped from his stall one day just to show a new employee that he could do it.  Stood in the aisle and chilled until someone made a fuss about him being loose, then scooted back into his stall.  They added bars to his stall so he can't hang his head out since he's basically unstoppable when he can reach the latch.  He also busted loose on the lunge again.  Seriously, Theo, you're nineteen.  Knock it off!  I warned Trainer Z to lunge him after his clip since he does enjoy doing his naked dance after a clip.  Those toddler stallions have nothing on him.

If all goes well, I'll get set up with a once a week lesson.  It will be the only riding I do in a week but it's a hell of a lot more riding than I'm doing right now.  Theo's actually training will be with Trainer Z, I'm just the owner that comes out to flop around once a week.  But I'm looking forward to it.  He looks so good under saddle now, I want to experience him when he's all fit and tuned up.  I'm keeping my fingers crossed that my body is up for this.  I feel good, though.  I really do think it's time.