In summer, I have a beautiful red mare. She's almost copper colored with a long, full tail. She shines. She shimmers. She ripples. She's lovely and sleek and a well groomed athlete. 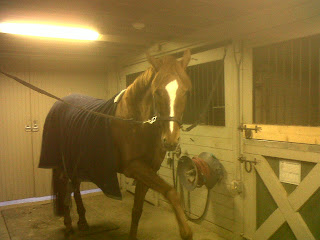 The yak, offering to shake.
She's fuzzy and dirty and sports an afro. She's got a beard a billy goat would envy and ear tufts that put an owl to shame. This is my winter pony. She's a cute yak, but she's still a yak. It's kind of embarrassing, but my other alternative is to stand in a cold barn aisle and pull her mane for no reason other than my pride. I like being warm more than I like my pride.

This is the first time I've caught her little trick in a photo. She had this behavior when I got her and I swear someone taught this horse to shake. When I'm too slow with the treats, she holds her front right hoof in the air. She doesn't really paw with it and it's not an anxious behavior. I think she's offering to shake. I discourage it, but it still pops up. I had a candy cane in my pocket and the princess knew it.

I labelled all of her blankets and pads today in preparation for her departure on January 1st. The princess is migrating south, and my long months of withdrawal are upon me. I'm really not going to know what to do with myself. I'll ride on Saturday and make sure all her stuff is neatly packed, and then I won't see her until the end of March.

As the indoor season rolls by, we've spent a lot more time working in the ring. This is like putting my mare under a magnifying glass. People see her more and more people are interacting with her. In an effort to keep her busy, she's picked up a teenager of her own (a working student) that lessons on her, along with filling in when the more advanced riders need a horse for a lesson.

On the flat she's a dream. All of this time being watched has made it easier for my trainer to pinpoint our roadblocks in dressage and we've made major progress over the last month. She now looks like the first level horse she was supposed to be last month. Her back lifts, her stride lengthens, and she doesn't pull your arms out of their sockets. Getting her there isn't easy, but once you've got her? Butter. It's amazing. Almost any teenager or adult is happy to ride her in a flat lesson. She's super sweet, tries hard, and can be very fancy.

Over fences? I call that her Mr. Hyde personality. She'll be standing in the middle of the ring, quiet as a lamb and dozing. I wake her up and get her moving. As soon as she realizes we're jumping, a transformation takes place. She picks her head up, the motor engages, and she slams against my hands. Game. On. It's nothing compared to last year, we're doing courses at about 2'6" including gymnastics without batting an eyelash, but she's still an intense ride.

As soon as the course is done? Back to Dr. Jekyll, snoozing in the middle of the arena or watching the other horses going. On the flat, I'd trust her with almost anyone. She trots and canters around on the buckle with a relaxed headset that would make a hunter trainer drool. I had a clinic with Ashley McVaughn last weekend and Fiona was a bit of a mystery to her. I warned her at the beginning that she can be quite explosive, then warmed her up on the buckle. After the third cross rail, the princess woke up and her whole other personality emerged. Ashley was worried that she was psyched due to noise or cold. I laughed and said she was actually being really good.

And then Fiona dozed off in the middle of the ring and had to be poked awake to take her next turn.

The princess is an odd, odd pony.
Posted by Catie at 3:37 PM No comments:

An entire week devoted to nothing but studying statistics could make the sanest of people feel a bit batty.

I wasn't all that sane to begin with.

Tonight was my final, so my class is over and I don't have to think about school work for a whole month. In order to study (cram) as much as possible, I didn't make it out to the barn this week. Withdrawal is ugly on it's own. Coupled with statistics overload? Just damn ugly. So here's to thinking about things that do not involve Greek letters or probability! 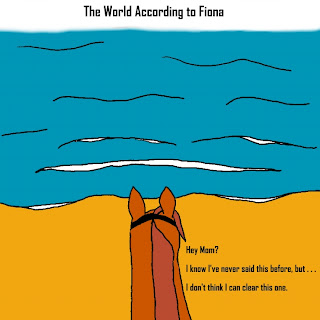 What says 'not statistics' better than pictures of our run on the beach?

I appreciate the fact that there's photographic evidence of my insanity. The sequence of us galloping is from us racing the teenagers. I'm trying to pull up, so it's not all that pretty, but you can tell we were having a good time.
Posted by Catie at 6:05 PM No comments: