With all of the bad reports I get, it's a particular delight to get some good reports.  Trainer Z messaged me on Sunday with pictures of Theo making new friends during his bath. 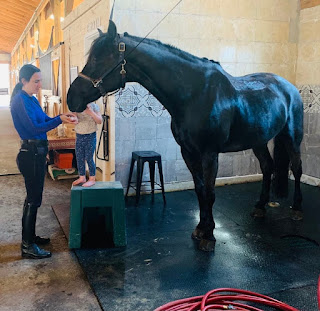 Ah, the tiny ones.  Theo loves them.  They ask for nothing and give him all the attention, skritches, and cookies.  He needed a bath since it was clinic time on Monday.  He got packed up with Sparklepants and off they went. 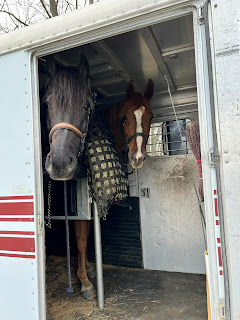 I will admit to being on pins and needles.  A new ring in a place he's never seen after a couple years of no shows or clinics?  Evil Theo could easily show up.  But I didn't need to worry, Theo is a bit of an old warhorse at this point.  He knows how clinics work.  Trainer Z messaged me afterward all aglow.  He was so good that the Second Level stuff got boring and they worked on Third.  Clean changes in both directions! 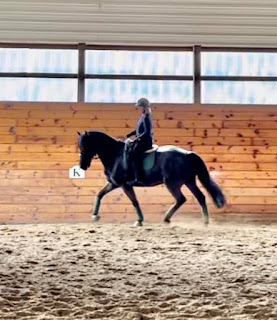 Trainer Z also surprised me by dressing him up in colors. I'm such a terrible influence.  Glad I left his dark purple browband for her, it looks awesome with the forest green. 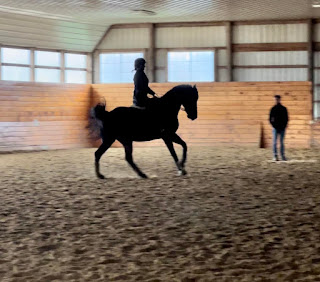 I'm so proud of him.  I got a video clip of him doing his left to right change, the one that was very sticky and he would trot one step rather then do an actual flying change.  He's got the mechanics pretty well sorted out now.  It's not fluid yet but it's a definite flying change with no drama and he no longer needs a pole on the ground to remind him to do it flying and not cheat.  He's still doing it as he heads into the wall but he's not far off from being able to do it at X.  His right to left is now clean and being done at X.  Well, sort of, he has to really concentrate and it takes a couple strides for him to plan the move in his head so accuracy is a bit spotty still.  But hey, that's fine for Third.  It's willing, it's clean, there's no drama.

He still winds himself up for the change, you can see him going '1, 2, Change!' as he's cantering along.  It's pretty cute.  He also grunts as he picks himself up to prep for the change.  But it's very calm, he's no longer upset or flustered.  Theo's an odd duck that way.  Learning something completely new upsets him and he gets overwrought.  Once he understands the request, it suddenly becomes no big deal and he can practice without any effect on his emotional state.  Turn on the haunches was the same, shoulder in was the same, half pass was the same.  Flying change was harder because he couldn't do baby steps or practice at the walk.  We're finally through the part where Theo gets upset because he doesn't understand.  Now he understands and we can finally just work on them without drama.

No lesson for me this weekend since I'm going camping but next weekend, I can start working toward being able to ride that fancy, Third Level horse I own.