GMHA was a successful show for us.  We hit both of my goals and are now officially half way to our Bronze.  But lessons were learned. 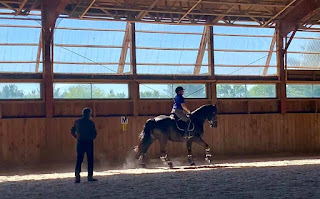 - Pony does not always straight tie, especially when he's feeling fidgety.  Take more precautions to ensure he can break away if tied.

- Pack one more bag of shavings then you think you need.  Good gravy that horse pees a lot.

- For every night that Theo is in a stall, increase your warm up time.  Pressure builds as he spends more time indoors and all the handwalking in the world doesn't seem to stay ahead of the accumulating pressure.  Don't stop early thinking he'll be tired.  He won't be.

- Theo can reach a surprisingly large arc around his stall, make sure absolutely everything is clear of that area.  Especially snacks, breakfast, sodas, saddles, blankets, hay, lead ropes, and absolutely anything that will fit in his mouth or that you do not want drooled on. 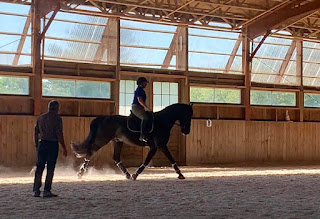 - Lunging will be a thing from now on.  The new, improved, powerful Theo doesn't get tired from warm ups and tests.  He also has plenty of ways to express himself.  If he's staying in a stall, plan to lunge in the morning for at least 20 minutes.  We all know lunging at shows sucks because there's never enough room but he apparently needs to let the bucks out and the other option is for him to do it under saddle.

- Keep the freestyle music quiet so he will comfortably lengthen while going toward the speaker.

- Not all judges will love the pony.  That's fine.  So long as the majority think you're going the right way, keep going. 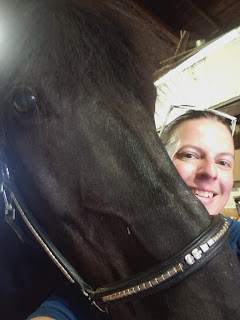 - If you think he's supple enough in the show ring, he's probably not.  He will always be a tourist and prefer to stick his nose out so he can better check out his surroundings when in a strange arena.  Stay on top of it, especially when he's lit up.  The outside rein is your lifeline when he's considering using his powers for evil.  Kick him up in that rein and don't let go.  Channel all of that beautiful power and energy into something good.  He will let you.

- Drill your figures until you and Theo can both do them in your sleep.  No more egg shaped 10m circles or oblong 15m circles or loops that overshoot center because you're distracted.  You can't spare the points and the judges are no longer ducking behind their hands during your tests.  They notice.

- When in doubt, do what Trainer Z said.