Theo got a couple days off after GMHA since I had Dermabond holding my scalp together and I wasn't supposed to 'perspire excessively'.  I wear a helmet, it's June, and it's NH.  Perspiring heavily is all I do, especially on my head.  Trainer A hopped on him twice to keep him from getting overly sassy and then I hopped on for the first time on Friday.

Good news, my hair knots stayed in place despite my ridiculous sweating. Not that it really matters anymore, everything is closed up and the Dermabond is separating as it's supposed to.  It itches like crazy and I'm losing my mind.

Not so good news, I have some unexpected soreness in the upper back.  It's only noticeable when I'm sitting the trot because the jarring irritates those muscles.  It appears my major muscle spasm when I got whacked isn't quite done torturing me yet.  I'm being generous with the Advil, heating pad, and stretching to help the last of this soreness work itself out.  I've got a western dressage show on Sunday and posting isn't exactly an option.  I may have to try to get a massage in for myself.  Shocker!

Theo is doing fabulous and aside from some missing hair in front of his ear, you'd never know anything happened. 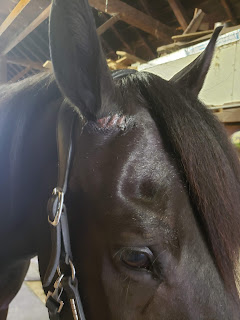 He enjoyed his Friday jump school and Saturday slacker ride in our western gear, but then the dressage saddle came out today for our lesson with Trainer Z.

After seeing away show Theo in the flesh for the first time, Trainer Z had a plan.  We  jazzed Theo up and then brought him down about a dozen times until both of us were comfortable working in that jazzed up state.  I shouldn't take my leg off the second he starts to snort and carry on, that's my cue to get my leg on and get him pushing into my outside rein.  We did a lot of rapid fire transitions between gaits, within gaits, and into different movements to make him all spicy.  I had to dare to touch him with the whip when he was already firing on all cylinders which is a bit terrifying.  Then I practiced my walk and accepted the fact that jigs may happen, but I've got to put my leg on.  With that spicy, teetering on the edge of explosion walk and my legs on, that horse can do a stunning canter transition.  Some of them were tangles of legs and snorts, some went against the bridle and flailed, but a precious some were just beautiful.  The best we've done.  That's my motivation to keep doing this because as we learn to harness the spicy, powerful, reactive stud muffin that is Theo, we're going to be able to do those beautiful transitions.

We also addressed our lack of mediums.  Part of it is just power and I've been assigned to do at least 8 trot lengthens each ride to build up the muscle.  Real ones, not pretendy ones.  Longer frame, bigger steps, not quicker.  While he was jazzed up he gave me my first actual medium (about five steps of it but enough to make me yell 'whee!') so we're on the right track, we just need more muscles. 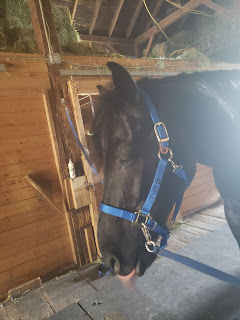 I've had very limited luck with the canter half pass in the past but with the lengthenings in between, Theo was popping along well enough that he could stay out of his own way.  When he got stuck in the half pass right (weaker side), I was shown how to really emphasize the bend to show him the way.  He got unstuck and managed to do his canter half passes in both directions.  I was quite impressed with the effort.  I've been assigned to do those in my dressage schools because we're going to need the extra lift they'll bring to his canter.

It's a lot of homework and it's split 50/50 between the mental and the physical.  We have to work our spicy medium walk transitions until I no longer take my legs off because it makes me nervous.  Theo needs to accept that my legs are going to come on no matter how spicy/snorty/ridiculous he's being.  All the rest is about developing the push muscles for the medium trot and the carrying power in the canter.

I won't have another standard dressage outing until August but I think I'll be picking that outing based on when Trainer Z is available.  She wants to coach a warm up or two to help me get used to warming up this spicy new Theo.  I'm totally okay with someone guiding us through this little transitional period in our lives.  As she put it, I need to think less in the warm up for a bit while I get used to the new feel.  I fully agree to thinking less.  It's really in everyone's best interest.
Posted by Catie at 4:20 PM