You'd think I'd be used to getting texts involving my horse's exploits.  And yet, I still feel a bit embarrassed when I get texts about my horse doing things like throwing a fit and threatening to rear because he didn't get a cookie as fast as he wanted.  Or trying to bolt out of the arena because jumping 6" cavaletti are just too exciting.  Fall Theo is in full force and he's living his best life.

Theo.  THEO.  This is how you end up having your workload increased! 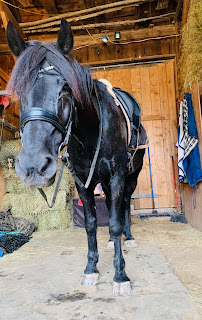 Sorry not sorry, mom
Yes, I sent Trainer Z a cookie bouquet because we both adore Theo but he is a freaking handful at certain times of the year.
Normally I would take this as a sign that he does not need help regulating his temperature but Trainer Z wants to take advantage of all that excess energy so that means it's time for a clip!  We're running a couple weeks later than usual since he's been in relatively light work as he builds up strength.  Which is also apparently causing some of the shenanigans?  So in the interest of Trainer Z being able to work Theo hard enough to actually find the bottom and bring his theatrics to an end, it's naked pony time.
So after running a 10k and before finishing up my final project for my first class in the doctorate program (because I'm an idiot), I drove up to visit mi papi and shear him like the feral yak he is.  Trainer Z was kind enough to give him a bubble bath the day before.  Theo was not impressed. 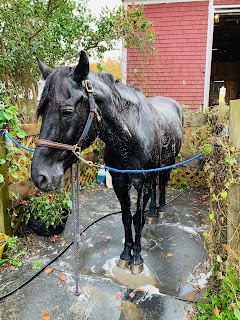 He just deflates when he gets a bath
But that meant I had a dry, mostly clean, mostly exercised pony to work with.  I'm not sure I'm doing the dressage horse owner thing correctly.  I mean I'm really good at writing checks but I thought it was supposed to be all fancy dancy.  I don't think it's supposed to include half a horse worth of hair up my nose and the other half down my bra. 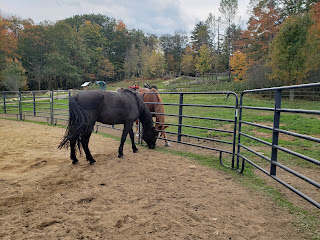 Theo post clip, hanging out with his BFF Sparkle Pants.  Sparkle Pants is a very fancy young WB that's currently winning a lot at Second.
But it's done now and Trainer Z can commence with working the sass out of Theo.  He's back to feeling like a First Level horse in his balance and power which is great for 2.5 months of work.  He had enough muscle around his stifles to guide the lines of his clip!  Still hoping he'll be back to his Second level self by the new year.  Trainer Z is feeling confident and Theo is just gobbling up the consistent work.  I wasn't sure if he was going to want to get back to big boy work at his age but apparently, he can't get enough.  It won't be that much longer before he's back to working that half pass and those changes.  And the new indoor is so close to being done! 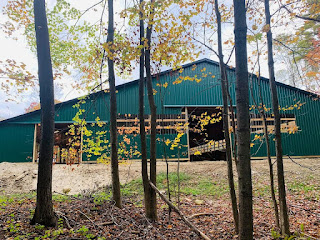 Starting in November, Theo will be living the super fancy life.  He'll have a stall in that brand new arena/barn with a run out paddock and gossip doors.  The horses will even have skylights!  I suspect Theo's doors will end up shut because he's a bit destructive but we'll see.  He's on unlimited hay 24/7 so his chewing behaviors aren't too bad.  It also means that he'll be in full training straight through the winter since he doesn't even have to go outside to get to the arena.  Knowing him, he'll be out in his paddock straight through the winter.  Feral pony is feral.  But no more having to wade through knee deep snow to retrieve him and bring him in for his workouts!

There will be more pictures of the new digs after the new barn party in November.  But things are looking very up for Theo.  He's happy as a clam and Trainer Z is weathering the storm known as fall Theo with grace and humor.  Very glad I decided to send him to a trainer that specializes in toddler warmblood stallions.  That makes Theo the good kid on the roster.  Relatively speaking.