What have I done

It dawned on me last night while working on my shoulder in on the quarter line.  I was putzing around with the angle, trying to see if Theo's short back makes it harder for a judge to see what I'm doing.  It was something Janet Foy mentioned and I looked in the mirror and went 'damn it'.  Because he has such a teeny tiny back that the movement doesn't really show up well.

But it's not worth fussing over because I don't do shoulder in at shows, so no stress.  I can practice more angle or less for fun and adjustability (that's not a word but I'm leaving it).

And then I remembered, I do show in shoulder in now.  On Friday, I'm doing Second level.  This Friday, as in three days from now.  For real.  At a show.  In front of people and a judge.  Yes, judges are technically people but they get their own classification in this situation.

And then I halted in the middle of the ring for a minute while I practiced not hyperventilating because, after the better part of six years of trying, I'm moving up to Second.  I'm finally busting free of the level that I started back with Allen in 2005.  I've been a First level rider for fourteen years!  On the one hand, it's very exciting.  On the other hand, it's freaking terrifying.  Talk about taking the training wheels off and I've had those training wheels on for a very long time. 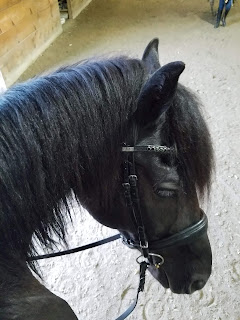 Of course I'm afraid I'm going to get out there and fall on my face.  I have a long and stunning tradition of getting tense at shows and not being able to sit in my saddle.  More of a concern when you've got to sit everything.  And my mediums?  Well, hopefully we'll get a 5.5 or 6 with a comment about 'tried hard'.  Because pony still doesn't really understand the full bounce potential of his booty.  He's figured out sitting, but bouncing is much harder for him.  I know judges tend to be a bit more gentle with Second 1 because they know it's a lot of riders and horses that have just started to figure things out, but I'm also aware that we're going to have some movements that are . . . . in development. 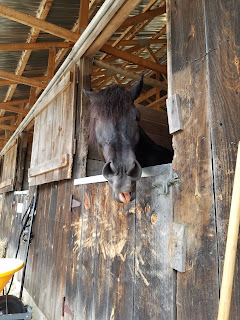 I actually considered scratching my Second level tests during my moment of panic and just doing my freestyle and the First level test I signed up for as a back up in case NEDA Spring went sideways.  So far I've convinced myself to get out there and ride my Second level tests.  No one watches Second 1 anyway.  I'm sure the judge has seen worse than a rather clunky draft cross and a nervous ammy struggling through a move up test.  I'm comfortable with being marginal and forgettable at this point.

I have friends going to this show with me and one is offering to put Bailey's in my coffee before my test.  So long as I have a reader, I may have to take her up on that.
Posted by Catie at 1:21 PM