I had two things I wanted to get done at this show:
My Second level debut came up first.  I was an absolute nervous wreck, not helped by the fact I got a 60% in my First 3 test Friday morning.  OUCH.  It was flat due to mooing cows and me not wanting to let a certain someone look around but come on.  60%?  The judge didn't like our connection and didn't think we had the training to be ready for the level.  I haven't gotten a 6 for submission with Theo since before Mary Howard, especially when he didn't put a hoof wrong.  5's for both leg yields.

And in three hours, I was moving up.  Hurk. 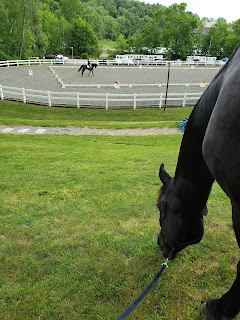 Trying to teach Theo dressage in a more visual manner, watching the FEI classes while hand grazing on the hill over the White Ring

I almost scratched.  So many times I wanted to stop by the secretary and scratch.  It got worse when I realized that not only did they put Second 1 in the White Ring after all the FEI classes, we were going to have two judges.  Who does that to Second 1 riders?!  We're all melting down, trying to figure out how to sit the trot, wallowing in the great abyss of dressage training, and they stuck us in the FEI ring right after the Young Riders trying to qualify for the NAYC with a swath of spectators and kept both judges on duty.  General consensus was that this was fairly evil.

I warmed up as best I could while trying to not hurl over my horse's shoulder.  I carried my whip and tried to be brave and get him right up in front of my leg, even if I was seeing some signs of naughty Theo lurking.  The more I turn up the dial, the more often naughty Theo appears.  He's much bigger and stronger than he used to be and he doesn't always use his powers for good.  But our connection is terrible if he's not way up in front of my leg so he got a tap tap and I held on to the barrel of TNT I was creating.

They finally sent me in and I very clearly told myself 'whelp, doesn't matter if you can do it or not because you're already doing it so fuck it, give them a show'.

Holy crap we look like we belong!  Our mediums are quite sad but that shoulder in was on point and the circles were actually 10m.  Theo was so excited to finally do his walk to canter in the ring that he had a momentary flail when I cued.  Trainer Z saw and has a plan for us to fix our new inability to have a polite walk to canter.  Spoiler, it involves me not letting go of his face in the medium walk because I'm afraid he's anticipating the transition.  He also decided to shrug off my half halts for some transitions because he's a big boy now and doesn't need my input but we kept the wheels on.

We have so much homework to do but at least I can confidently say that he is now a Second level horse.  Not confirmed, but he can show in collection and not be laughed out of the ring even when there are experienced judges (Dorothy Demis at C (R), Sara Schmitt at B (S)).  We got a 6.5 and a 7 for gaits, so that box is checked.  We got a 7 on one of our shoulder ins and 6.5 for our reinback.  A 3 and a 4 for the 'creative' canter depart which really hurt our score, but when we did the transition as practiced we got a 6.5 and a 7.

Mediums averaged about 5.5, so we know where to focus in the coming months.  He's got a medium in there, it's just slow to build and more quick than ground cover.  I want to at least get a consistent 6 there and get our impulsion score back up above 6.  We also got a 6 for submission.  Creative departs do not help there but for the level, he needs to be a bit more elastic in the connection and not shrug off my half halts because he is excited to show off his moves.  We can do it all day at home but he is a different beast away from home and I'm less effective when I'm a shivering, nervous wreck.  We'll get better.

It's been a long time coming but we're now showing at Second level and I feel like we're in the right spot.  We're still flailing, we've got a lot of work to do, but we definitely belong at this level.  I feel much more confident that I'll get my other Second score this year.

Next up: Freestyle in the White Ring
Posted by Catie at 7:29 AM