Shut up and dance with me

I love having a schooling show facility right down the road.  We get to practice packing, trailering, warming up, and showing without the same level of freak out or expense.  Theo has been to Oakrise so many times that he might as well have a stall there.  He gets off the trailer, looks around, and goes 'oh, cool, the food booth is open' and gets to work.

Our goal for the day was to let his other rider practice her First level tests (she moved up!) before her rated debut with him.  I threw my stuff in the truck so I could do a run through of my freestyle in a show setting at the end of the day, but not competing.  I'm good friends with the secretary and she let me enter as a Test of Choice with freestyle. 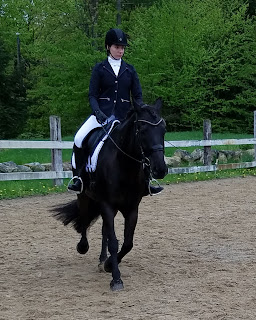 Theo's other rider warming up, went with the solid black PSoS browband to go with her beautiful coat, Smartpak saddle pad with black and silver piping

First was Theo being a school master and showing his rider the ropes at First.  I coached in warm up for how Theo warms up best.  Keep it minimal.  Get him forward and off your leg, but make sure you leave all the good stuff in the tank for your test.  He did about about 15 - 20 minutes of actual work and he was ready to roll.  His rider was a bit nervous with the small warm up, but she trusted me and went with it. 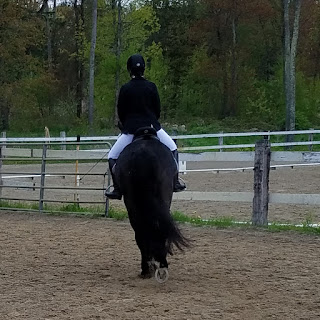 Still the best tail in the region

The first test had some navigation issues, not helped by me reading the test and Theo sometimes transitioning on my cue, not his rider.  58% for purely technical reasons (blew by a letter, didn't transition at X, etc).  Her second test, however, I got someone else to read.  Someone Theo doesn't know.  63% and High Point for First.  Woohoo, school master Theo! 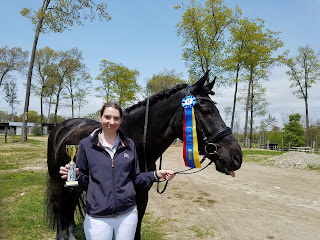 Still sticks his tongue out for the picture

Tough judge, but nice and her comments are all very solid.  She taps you hard when you deserve it, but she's generous with the 7's.  She's an 'r' judge and judges schooling shows the same as rated shows, which I appreciate.  The test looked like a 63% and she got it.  His other rider is feeling more confident about going First with him in a month after he carted her around for both tests.  Leg yield was sticky, but his lengthens were much bigger than what he does for her at home.  Good she got to experience that.

And then it was my turn. Theo got grass and time to chill while I got dressed.  I did about five minutes of warm up total, enough to let him know mom was on board and the requirements had changed a bit.  I had a friend video taping, I had the sound guy ready, and I bombed down centerline.

First take away:  EARNET!!!  I gooped him up with Swat but his other rider was nervous about his history of shaking off his bridle when in an ear net so I left it off.  We were doing good until the head shaking started.  You can see it starting in the second leg yield and I was simply trying to keep his bridle on during the walk.  I couldn't really steer through that section of the test.  He's not a head shaker, there was a bug in his ear and he was super upset.  I corrected the head shaking in the canter and that was the blow up.  MOM there is a bug in my ear and I need it fixed NOW!  Ugh, Theo.  Ugh.  I made him run the test again afterward as schooling and it was spot on fantastic.  No bug in the ear = totally peaceful test.

Second take away:  The choreography can be completed even when I have a massive resistance which makes me much more confident.  Theo completely blew that 15m circle and yet we completed with our music and we hit our markers.  Whew.

Third take away:  The canter section needs work.  It is tight and does not flow as well.  The judge (who I didn't know was judging, whoops) commented on the canter pattern needing more flow.  Part of it was me hitting markers with our blow up at the start so things were rushed or a hair behind the music, but the first half of the canter work is not very flowing.  I've already sat down with my freestyle app to rework the canter, using the fact that he's very good at counter canter to move the lead changes to spaces where we have more room to breathe and we won't interrupt the flow.  Also giving the movements more time as his more collected canter has slowed slightly.  Not usually noticeable, but it adds up in a freestyle.

Fourth take away:  You can totally tell I'm in pain.  My SI was out and I kept trying to sit the trot out of habit and it was just too much.  Thank goodness for First level tests and being able to post.

Artistic and music both got 7's, getting us to 64.1 despite some of our technical issues.  AKA pony temper tantrum in two movements he usually scores well in while I tried to not move my lower back.  I'm overall happy with his performance and am way more confident in our next outing where I'll do my freestyle twice.  I feel like survival is set, now I can polish.  And buy more earnets.  And visit a chiro.

We took papi home and tucked him into bed with many cookies.  He was a good pony and there were many compliments on his correct, forward self.  Hopefully my SI will settle and I'll be able to sit trot again soon.  Two weeks until NEDA Spring! 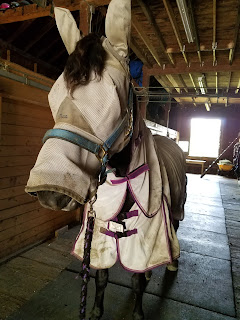 Still planning on taking this dork out in public