Three day show, so not going to try to fit it all in one post.  I'm still recovering from my post horse show hangover and the idea of that much typing makes me want to go to bed, crawl under the blankets, and never come out.

On Friday I packed up the beast and hauled him two hours to the Eastern States Exposition for the Arabian Horse Club of Conneticut's annual show.  It's a huge facility.  I took Allen there many years ago for an equitation final.  I took Fiona there to be a demo horse at Equine Affaire.  It was Theo's turn to experience the chaos.

Theo did not approve, especially as our first show of the season.

The usual dressage ring was under construction, so we were in a temp set up in a field.  The footing was fine, but it all seemed a bit cobbled together.  There were big cement blocks holding up the fencing around the warm up area.  We were right next to the pallets full of bedding and had cars/trailers/even the occasional semi going by the ring. 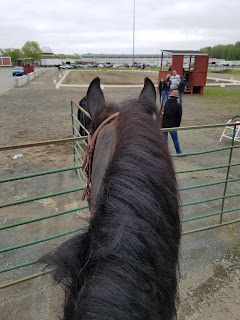 The view from the warmup ring

While tacking up I realized I forgot my wool pad for my western saddle.  Fortunately my new saddle has silicone cushioning and I could ride him in just a saddle blanket for the weekend.  Not how I wanted to ride and not something I ever want to do again, but at least I didn't have to bribe someone to rush my saddle pad down so I could ride.

I worked him in the warm up for about an hour when we got there.  It was nerve wrecking at first because he was so distracted and very quick to spook and spin.  But then I put my leg on and asked him to come back to me and he actually freaking did it.  The spooking dropped away to nothing and he let me give him a little bump to refocus him when he tried to jump away from the fire hydrant for the tenth time.  It was massive progress for him (and me) that I was able to work him through his distraction in a positive way.  Walk, trot, canter with no attempts to unload me and just some spooking at things like pallets being moved and unloaded.  Which is pretty fair, let's be honest.

No schooling allowed in the competition ring, but I did take Theo for a walk around it after the Arabian dressage show was done.  He did fine until he realized he was the only horse in sight in any direction since everyone else had left for dinner.  He then had a small meltdown.  Twenty more minutes of convincing him that he was not going to die got him walking around calmly enough that I was pretty sure I wasn't going to get launched.

The behavior in the stall has not changed at all.  Much angry head shaking and demanding to be let out.  I put about 30k steps on my Fitbit on Friday, much of it handwalking to avoid the stall being destroyed. 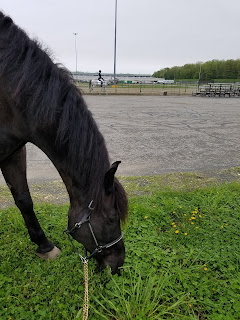 The best grass was next to warm up,, the pallets of bedding are just out of frame on the right

I also found a restaurant where I could get street style tacos and a margarita.  That helped the weekend get off to a solid start. 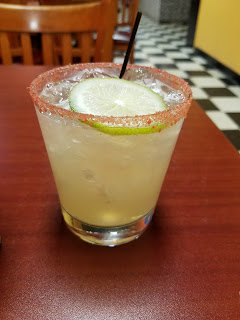 All hail the well made margarita

During dinner we had a band of storms go through with torrential rain, but it was over in an hour.  Didn't seem like a big deal and Saturday was forecasted to be 66* and sunny.  Just perfect.  Overall the first day went about as well as I could have hoped.  We settled in the stabling, we worked, and no one completely melted down.  I kissed my pony goodnight, went to my motel that was only .25 miles away from the facility, and proceeded to not sleep a wink because I'm bad at sleeping in motels.