Saturday dawned absolutely glorious.  Sunny, warm, and my friend that volunteered to groom arrived.  All of a sudden I had another pair of hands.  She took Theo out for a 30 minute hand walk while I cleaned his stall.  It's the little things that help with a show.  I don't need a lot of help, just someone to entertain the heathen while I do the day to day chores.  When I didn't have pins for my number, she ran out to buy some so I didn't have to descend into a panic.  She was a life saver in so many little ways.

Theo was delighted to have another human to annoy and coax into providing treats. 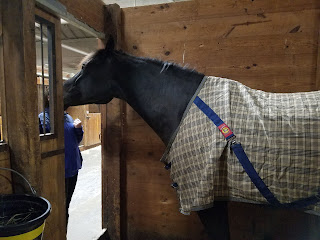 I rode him in the morning to see what I had in the tank and ended up doing about 30 minutes to burn off some of the excess energy from being in a stall.  Interesting discovery, western and English riders are not supposed to warm up together under USEF rules.  This is due to differences in equipment rules and makes it easier for the stewards to watch us.  Half of the warm up was a sea of mud with water standing on top due to the previous night's storm.  The temp rings just didn't drain at all.  Yeah, it rained hard, but that was over twelve hours ago!  And the footing was more like mud, not wet sand.  I don't care about wet sand, I'll even jump in that, but this was sucking mud.  Guess which side the western dressage got?  Yeah, it was gross.  I should have gotten a picture of Theo after his warm up.  Mud up to his midline and all over my tack. I also noticed that the footing was sliding and we couldn't canter much, but the competition ring was in good shape with just one muddy corner so I didn't worry too much.  Theo doesn't need to school movements, he knows them by heart.  I can burn energy safely in trot.

Theo went straight to the wash rack for a bath after that work and then back to his stall for more hay and a nap.  I cleaned my tack and changed into my show clothes, finally getting all of my new show look together. 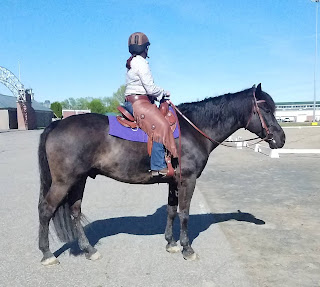 Pro show pony knows when to chill and save energy.  He looks like a total mule in this picture.

Cream shirt with purple flowers, my new chinks from Buckaroo Leather, my new shorter boots, my brown Troxel, and a purple saddle blanket.  I'm in my English spurs since they work fine with my boot cut jeans and are more precise than my rowels.  You really can't tell with my jeans over top.  Theo has the same hideous bridle since the color matches.  That's my next thing to replace.

Considering some of the melt downs he had the day before around that competition ring?  I was so, so, so proud of him for that test.  As soon as he hit centerline, it was show time.  It is such a pleasure to ride a horse that understands the job and is happy to do it.  He broke when he found the mud next to C but it felt like he was genuinely surprised to have the footing slip under his feet.  I had to forgive it and he cantered through it each time afterward.  We got rapped hard for our halt that didn't really commit and our shoulder ins that didn't have enough bend, but we still got a 65% and won the class.  I am not complaining at all.  He looked so good down that final centerline, so happy and relaxed while bouncing along.

They decided that setting up all of the office work in the second judge booth was a good idea, so Theo was struggling with all of the noise coming from that cave.  People arriving and leaving, the printing calculator, moving equipment, etc.  I heard a noise from the booth right before he bucked so I know what happened.  He came right back and only one score was affected.  We got another 65% and won the class with comments about our leg yields needing better bending.  Yeah, I know.  I know that right down to my soul.


You can hear that screeching sound on the video.  That was a trailer jack knifing next to the ring (right next to that arch in the background).  I startled badly because it was sudden and I thought it was an injured animal.  When I startle, Theo startles badly.  You can't hear the staff yelling at the driver and the driver yelling back while they (noisily) tried to get things straightened out.  I did try to pick my canter back up, but Theo wasn't having it since I was still rattled.  Neither of us do well with sudden, scary noises.  I put my hand up and withdrew.  There was no positive experience to be had in that situation.  The trailer and yelling staff weren't going anywhere and Theo was distracted at a level I couldn't work through while doing a Level 2 test.  Our next movement was a simple change at X, followed by a lengthened lope heading back toward the commotion.  Hahaha, no.  I walked out rather than give him a bad experience after being so good.  He didn't try to dump me or leave, so it's still progress.

The judge flagged me down to ask what happened and I told her that there was no positive experience to be had, so I was stopping.  She complimented me for choosing my horse over the test and said she was looking forward to seeing the test the next day since it had started so well.  We did discuss whether or not he was a personality that could handle three tests and I'm leaning toward no.  It's still hard for him to march out there by himself and three may be too much for him to handle mentally.  I'm thinking that he'll always be a two test pony, which is a disadvantage at western dressage shows.  But whatever, he's a super star and we're becoming known in the local western dressage crowd.  He's made for this discipline and tough to beat.

I tucked my tired dressage pony into bed and went to watch the Arabian show in the coliseum for a couple hours.  Interesting, but not my cup of tea.  Especially the saddle seat classes.  Just . . . not for me.

We headed out when the show wound up around 10pm (can you imagine showing that late at night?!) and managed to snag six hours of sleep.  The forecast was for cold and rain on Sunday.  The rain was already starting when we went to bed.