I know I went to an away show just a couple weeks ago, but I still feel utterly unprepared for my show this weekend.  It doesn't help that work went ballistic for reasons outside of anyone's control.  Three clients going live and pretty much the entire team is out on a planned vacation or a family/medical emergency.  Double back ups and we're still unable to cover.  It's statistically wildly improbable that this would happen but here we are, with me pulling two jobs and client facing calls while prepping for a horse show.

At least my trailer is ready.  The truck is gassed up and road ready.  I did clean my tack this weekend so it just needs a touch up.  Laundry still needs to be run, but I'll work from home tomorrow to take care of that.  The pony?

Pony was described as 'spicy' today when Trainer A rode him.  While having his shoes done, he overreacted wildly to his hot shoeing, broke his cross ties, hurt my farrier, and ran off down the road with no front shoes on.  What the hell? 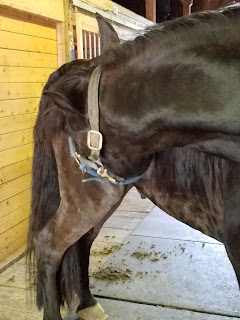 Glad to see all the body work paying off, but less levades would be awesome

He was in for a couple nights in the last week while I combated some very stubborn thrush.  He, like most horses, will happily stand in the rain and mud while his dry shed sits waiting.  I had to take the choice away from him to dry out his feet with this ridiculously wet spring.  We made it five nights with a stall at night and daytime turn out before he flipped his lid.  That's actually a new record for him.

Tonight he's back out in his field full time with my farrier's blessing.  The thrush is on the ropes and his sanity has to take priority.  Tomorrow I'll be riding him for as long as it takes to find the bottom.  It will be a long ride.  Hopefully he'll be less twitchy and crazy after being in his field for 24 hours.

Friday I leave at 11:30am, so I'll probably ride briefly on Friday morning to keep the sass levels to a manageable level.  Then I'll hack out and school the rings at the show grounds.  Only two rings to school and they're right next to each other.  Sound check is 6pm for my freestyle.  It's the first time I have to go to a sound check, so that's an exciting addition to the schedule.  I have no idea how that works, but I'll be one of two freestyles each day so it won't be a crowd.  The show is looking pretty small which is a surprise.  NEDA is not a small GMO and the last time I did this show, it was bigger.  I hope this isn't a sign of shows fading away in the area.

My goals for the show are very realistic.  62% for my First 3, 65% for my freestyle.  I'm strictly going for those qualifying scores.  Since my large arena has a round pen in the middle of it right now (I really am too cranky for words about that) I haven't been able to ride my updated choreography.  I'll be sticking with the one I know for this show.  I haven't ridden through First 3, either, but I'll manage.  It's similar enough to the old First 3 test.