And then there was one

Theo's had a second rider for well over a year now.  He likes her, she gives him lots of cookies and respects his need for autonomy and minimal effort.  She's learned a lot from him as well, as evidenced by their performance last weekend.

Today, his other rider bought her very first horse.  And it's a very familiar face. 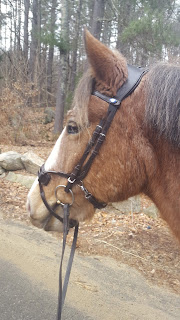 Ratbag pony has found his person and Theo's other rider has found her pony.  Apparently she and I have similar tastes (and Ratbag pony is a lot less ratbag these days).  I still giggle that I'm the rider in his sales video and the owner of her current partner.

So that's very exciting news for her.  He's passed the vet and everything.  But what does that mean for Theo?

It means that I'm Theo's only dance partner for the first time in two years.  It's going to take some adjustment.  He still gets ridden once a week by Trainer A so it's five days a week that he needs exercise and attention.  He does very poorly with time off.  I may have to add to my budget and get him a second ride with Trainer A each week so I can see my husband on occasion.  This will be good for Theo since he won't have any mixed signals.  It will be the same set of rules every ride.  He'll miss his slacker rides, but I do want to keep this as simple for his pony brain as possible.

On the one hand, I can stop feeling guilty for taking him away for shows this summer and making him unavailable.  I can also stop having moments of control freak rage when things aren't the way I want every single time.  But it also means that I'm back to being a full time partner and that will require some changes in my schedule.  I'm going to have chats with the hubby and boss to come up with a plan.  Somehow, some way, I will keep Theo from getting even chubbier than he is currently.

He looks like a broodmare right now, not gonna lie.  I know dressage horses are chunkier than their eventing equivalents but geeze.  That is a substantial booty that would not fit in a trailer that is not warmblood sized.  Pony got put on a ration balancer instead of regular grain to control the growth going on.  I don't need to buy more girths. 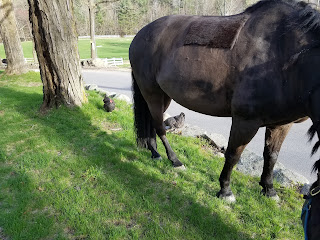 I was trying to get a picture of the chickens following him around to get the bugs he stirs up but mostly got his belly
Posted by Catie at 10:35 AM