Saturday was awesome.  Super awesome.  But I fell asleep to the sound of pouring rain and that was not what I wanted.  On Sunday I was slopping through the rain on the way into stabling.  I wanted a good spot for my trailer so I hitched up from the overnight parking and moved it around first thing in the morning and I soaked my jeans climbing around in my truck bed.

It was also freezing so my friend and I were quickly rummaging around for more layers.  I got dressed early for my class because chinks are nice and warm.  I realized my new western saddle was going to get soaked and cried a little about that.

We still had to walk Theo and we took a pass around the competition ring to check out where it had been rearranged.  The judge's booth was removed and replaced by a car, probably due to the judge freezing.  While walking around, I could see that the rings were quickly going under water.  They didn't drain worth a darn and the warm up was all standing water.  The footing was still giving way under my feet and the first bit of doubt started to filter in.  Why was I even going into the ring? 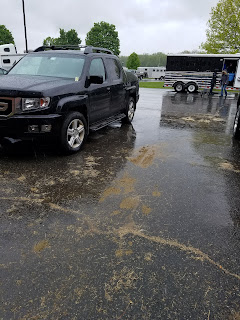 I talked to my western dressage friends and we all convinced each other to go for it.  We'd all driven a long way, it seemed dumb to pack it in without even trying.  There was an indoor arena for warm up for the coliseum, but as I discovered when I tried to go in there, saddle seat warm up is a unique experience.  I walked Theo in hand while trainers glared at me for being there and whooped and hyped up the horses.  After hand walking for ten minutes under a sheet, I gave up and took Theo outside.

It was so cold.  So, so cold.  40* or so and with the wind, it felt like it was going to snow.  The rain was coming down hard and I was out in warm up completely alone.  Everyone else was hidden inside and Theo was pretty sure this was the hands down dumbest thing ever.  We slopped around warm up, trying to get his muscles warm while not slipping in the footing.  After ten minutes, lunch break ended and I got the green light to go in whenever I wanted.

I headed straight for the ring.  Theo was just getting pissed in the rain and we were so cold.  If we were going to try it, might as well try it.  He entered beautifully and I am super proud of him for that.  Not properly warmed up, alone, in the driving cold rain, and he marched down center line.  It wasn't until we tried to canter into C and the water was up to his fetlocks that he broke and started to give me trouble.  He swapped leads, then refused to canter through the lake.  He's not an eventer, it's not like we practice that sort of thing.  I'm good with mud and rain, I jumped him in a soaked ring on sand just a week ago.  This was different.  This wasn't a nice sand ring that was full of puddles.  C was completely underwater, Theo was slipping, and I put my hand up.  Another withdrawal.  I felt dumb for trying to show in that mess.

Theo went back in his stall to be toweled down and bundled up while we packed up for departure.  The show announcer sent out a warning about ice on bridges and I felt better about my decision to scratch.  We got the stall stripped and Theo loaded up with no trouble.  On the drive back, we had sleet.  Gross.

So my show did not go at all to plan with Sunday being a complete wash out, but it wasn't a total loss. 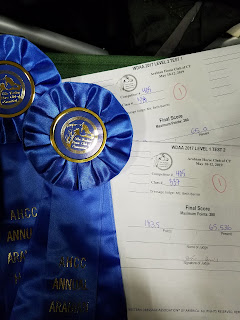 Pony's got all the moves for Level 2 and started the season in a very reasonable way.  I'm going to focus on the good stuff and let the problems from Mother Nature just roll off of me.  Was I a quitter to withdraw twice in one weekend?  Probably, but Theo had such a good weekend that I feel more confident going into our next outings.  That was our goal.

There will be other days and other shows.  We got what we needed, which was some good trips in an all new facility.  Onward and upward.
Posted by Catie at 6:58 PM