Today I had my very first western dressage clinic.  And I was in my regular old dressage gear.  I threw the demo saddle on my very nice (expensive) 7/8 wool felt pad and all of a sudden, I could totally see that it just didn't fit him.  Just nope. 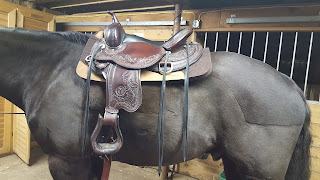 Too wide and diving down in front.  With the fluffy pad and his fluffy self out of the way, it suddenly became very evident that the front was not okay and it was sitting on the top of the bars as opposed to spreading his weight across all of the bars.  And I finally figured out what was wrong with both of the saddles!  He needs more flare/blocking at the front of his saddle so his shoulder can sweep underneath.  It wasn't a tight tree, it was the front of the skirt not having the right shape to let his shoulder go underneath.

So with great sadness, I put the demo saddle back in my car.  It goes back on Monday.  I threw my dressage tack in the trailer and set out for my clinic.

My truck was well behaved and the twenty minute trailer ride went off without problems.  My friend stole me and Theo away to the tack room to try on saddles.  It's so much easier to learn something like this when you have friends that will let you ransack their tack room.  It takes a team to manage a horse.

The massive ranch cutter from Martin actually fit him, but was so heavy I couldn't lift it up high enough to get it on him.  It was also quite long on him and I wasn't comfortable with that.  The best fit was a Cedar Ridge saddle that was a gaited type saddle custom made for a big shoulder, more narrow horse.  Of course he would want a custom saddle.  Ugggh.  We had a Circle Y barrel saddle on him, but it was too wide.

Poor Theo was very annoyed by the ridiculous number of saddles.  I let him pull his lead rope in his mouth and gnaw on it to deal with his frustrations.  I can't complain when that's all it took.

It was fun and I'll probably ride with her again, but I don't know anything more about whether or not I can do western dressage well.  I do have some fun new exercises to get him started on collection.  She wants us to start bringing his frame up, but focusing on keeping that softness in his jaw and harmony.  We worked hard on his lightness, getting him to move off of a light touch.  It was a lot of fun when he started hopping forward off of a small touch of the spur.

After my lesson, more saddles!  And this time I got some pictures since these were interesting.  Adjustable width western saddles?  I didn't know that was a thing.  Apparently DP Saddlery does Flex Fit western saddles. 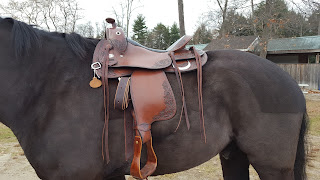 That little hole on the swell takes a hex key and you can adjust the width of the gullet.  We dialed in the width just for fun on this one, it took about ten seconds.  It did fit him well, and it's attractive, but is it $3K nice?  I'm not sure.  The leather isn't as nice as the Circle Y saddles I've been trying.  Nothing wrong with it, but not making me grab the check book.

I also threw the DP Saddlery hybrid on.  It's called the Quantum.  I was so curious, I hopped on to take a feel. 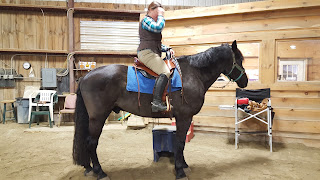 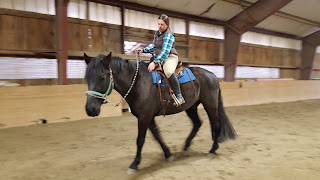 That is the first and most likely last time I'll sit on a horse without a helmet.  But it wasn't a planned ride, clearly.  I just wanted to put my butt in the saddle for a minute.  The seat is hard, as western saddles tend to be.  And the saddle is . . . ugly.  I mean there's nothing wrong with it, but the shape is just unattractive to me.  It has english style panels complete with flocking underneath, which appeals to me because I could have it adjusted, but I didn't like the shape of the panels.  Too round.  I also had a hard time getting settled in this saddle, I couldn't find my spot.  It fits Theo well, but I wasn't sold.  If I'm going to ride western, I want to ride western!  The horn was also insanely high and I was having trouble with that.

So I'm going to talk to the saddle shop on Monday about my next attempt.  I'm currently thinking this one: 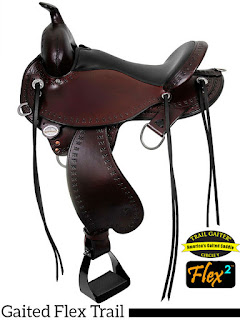 Let's see if the gaited tree and lack of neoprene on the bottom makes him a happier pony.
Posted by Catie at 7:55 PM