I think I've come up with a piece of equipment that will actually help my dressage. 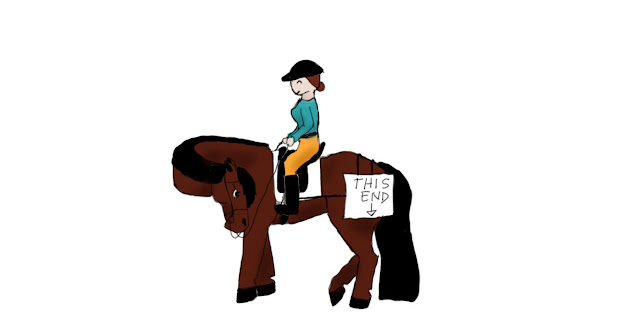 I see a market for this.  I need a Kickstarter.

While I work on the proof of concept, I'm working on getting his butt down the slower, harder way.  The fun thing that came out of my western dressage gone full dressage clinic was some work on getting Theo to tilt his pelvis and really sit.  He's now strong enough to try it, but he's pretty sure he can't do it.

I love the fact that his new 'omg I can't' reaction is to break to the walk as opposed to throwing an ever loving temper tantrum.  We still get little moments of curling and 'ugggggh, woman!', but he's definitely turned the corner on being willing to give it a shot.  He trusts that I won't push too far and that there will be cookies in the end.  He gets the confused, flicking ears, but he doesn't throw down and quit the way he used to.

After a nice, long, low, stretchy warm up, I picked him up.  And then I asked him to come up a bit higher in front of the withers without bracing or sticking his nose out.  Oh, and without laying on my hands.  Tough, but doable.  Then I asked him to take some smaller steps.  Smaller, papi.  Not slower.  Smaaaaller.  The ears start flicking and he starts wondering what this is all about, but he tries.  We can get 7 - 10 steps of short, sitting trot right now without dramatics or inversion.  Yay!  Then he gets to go low again and trot around the ring nice and big.

It's amazing how asking him to sit changes the trot we get afterward.  He stretches out over that topline and has some forward momentum because that's so easy compared to what I just asked him to do.  We do a set going one way, stretch, a set going the other way, stretch, just like his old weight lifting exercises.  We're also working very, very hard on me not over riding with my leg.  I touch him, he goes, I take my leg off.  If he goes forward, I say nothing.  It gives him a way to make me leave him the heck alone.  Theo likes it when I leave him the heck alone.

Between engaging the hind end, the increased laterals, and my improving discipline with the leg aids, the canter is coming back.  It's still hard for him and he wants to throw his head down and lay on his shoulders.  Right now I just want a steady canter with a nice contact.  I'm not asking for power, just carry the canter on your own and keep your head somewhere near normal.  With your nose in.  Last night I half halted and he maintained the canter while on his left lead.  I nearly cried.  I wasn't kicking and he was still cantering even with the request to shorten up.  Not very forward (Trainer A would be losing it if she saw me cantering that slowly), but it was positive and gave me a chance to really reward the try and make it a pleasant experience for him.  Positive training has a downside.  He didn't want to step back into the trot because there are less clicks in trot.  Hm.  Might need to address that in the future.

I'm enjoying this new focus on his hind end.  He's now strong enough and light enough that I can ask him to actually tilt his pelvis.  It's a visible change in the way his butt looks in the mirrors.  I tried to get video but my camera tipped and it was five minutes of the arena ceiling with me saying 'good boy!' and 'little more, papi' a lot.

I know I thought I was learning collection before, but this is a whole different ball game.  It's going to take forever, but at least we're enjoying the journey this time.
Posted by Catie at 1:07 PM