Maintaining sanity in the arctic

I realize a lot of people following along don't live in New Hampshire.  It's a pretty state, lots of maple trees and boulders and interesting hills/baby mountains/full sized mountains.  We're close enough to the ocean that our weather gets some buffering.  Temps don't go as high or as low as what you'll see at this latitude further inland.  Big thunderstorm systems tend to fall apart about the time they hit my neighborhood, giving us lots of rain but not much else.  My family in Minnesota is at almost the exact same latitude, but their weather?  I swear Mother Nature hears 'that can't happen' and replies 'hold my beer'.  Snow and a tornado on the same day?  Sure, why not. 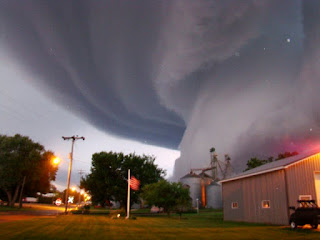 I used to be Minnesota tough.  I used to be able to accept that some days (or weeks), you just don't get above zero.  It sucks, but you put on an extra layer and you deal.  You also give your horse a month off at a time unless you have a heated indoor because sometimes, it's too cold to take a deep breath safely.  And let's be honest, Minnesotans don't go outside much in the dead of winter.  Minneapolis has an amazing skyway system so people can get around without having to go outside. 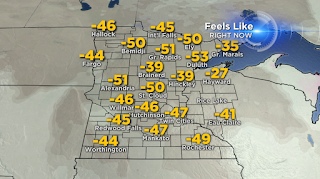 That's my home town Mankato proudly displaying -47 for a wind chill.  This means they didn't cancel school, too warm.

I've lived in New England for almost fourteen years now.  It's turning me into a wimp.  I woke up this morning, saw that it was 7* out, and buried my head under a pillow.  I have moved my Friday lesson to the afternoons just for this reason.  24* isn't exactly toasty, but it's a lot better than single digits.  Between the storm on Tuesday and the sharp drop in temps, I've been rather absent from the barn.  I don't think Theo minds much in these conditions.  He wants to stay in his shed and eat his extra hay.  These temps aren't normal for NH.  Our average high is 39* and our average low is 20*.  I'm being whiny, but at least I have a reason.  It's freaking cold!  And it's going to stay cold.  I've skipped one of Theo's clips to help him stay warm.  We'll see if the weather rebounds to normal.  If it does?  Naked pony time.

So now what?  I'm staring down the gauntlet of winter.  The icy, brutal path I must travel for two months stretches before me.  How am I going to keep my motivation up?  How am I going to continue to arrive at the barn, in the freezing cold and dark with no one else there, and trudge around the indoor?  With my new schedule, I don't even have company to motivate me.  I'm usually by myself and with lessons winding down as kids go into hibernation?  Lessons are done by four, barn shut down by 4:30.  I can go a week without seeing anyone.  It's kind of creepy, like working in a ghost town.  I talk to Theo a lot and play music because it's unsettling being in a silent barn.  I'm used to being in bustling, busy boarding/lesson facilities.  It's something I enjoy.  I can't say I'm enjoying being there during off hours. 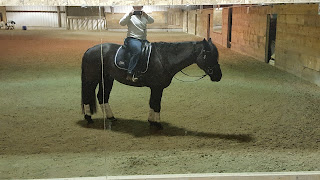 Just me and my long suffering pony

I think motivation is going to be a big challenge this winter.  I'm already considering giving Theo February off because that's the worst month for NH.  We usually get nailed with storms and plunging temps that keep you out of the saddle for a week at a time.  My hubby is already protesting the idea because I'm unlivable if I don't get my horse fix regularly, but taking the pressure of 'stay in work' off might make the month less depressing. 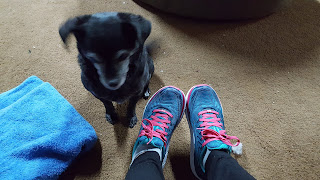 I can also hit the treadmill to keep the crankiness at bay.  New shoes (Clifton 4 from Hyoka One One) and my running partner (Chug from . . . no one knows).

Our last storm had rain at the end followed by the temperature plunge, so we have too much ice to go outside safely right now.   I had visions of going for a galumph in the snow, but it's iced over enough for my dogs to walk on top of it and there's some ice on the bottom as well.  Ugh.

I have the barrel saddle and a lead on a potential new saddle, so I can play dress up as a western rider.  We can work on the new tests and some new moves.  I am working him more from the ground. I think it's past time I teach him how to long line.  And I'm planning to take some time off from work in January to make up for working over the holidays, so I can ride at normal hours and maybe get in some extra lessons or outings.  Trainer A reminded me that I hit this wall every year at this time, usually after the first real cold snap.  She told me to put my dressage saddle away for awhile and to have some fun.  We agreed that I will not use my dressage saddle for January.  All jumping saddle or western saddle.

Any suggestions for a lone warrior and her disgruntled princess of a dressage pony to survive a New Hampshire winter with almost as much sanity as when they started out?  We don't have a lot of sanity in general, I'd like to keep what we have.
Posted by Catie at 3:50 PM