It was supposed to be simple

The Cashel was a bust.  It fit his withers and shoulders just fine, but it rocked.  Lifted front and back.  I'm sure I could have thrown a special pad on, but what's the point in buying a brand new saddle with a noticeable rock?  It's not like I'm trying to make my horse back sore.  So it was out of it's box for a total of ten minutes.  Back in it went and on Monday, it ships back to the store.  Ugh.

We threw a western saddle that was sitting around on him, but it was a full QH bar and dropped right down on his withers.  In a moment of desperation, I asked the barn manager to let me see her saddle again.  The one I plopped on Theo back when I started shopping and went 'huh, this won't be too hard'.  The random, cheap saddle she got used for her 14.3 hand mustang mare. 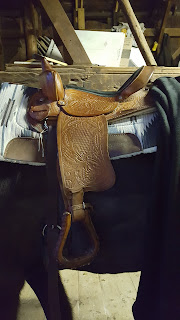 It's tiny, probably a 15" seat.  That's a 32" pad underneath it and it looks ridiculous.  It's an Easy Rider from Action Company which is a company that's slowly but surely been gobbling up other saddelries.  It's not a high end saddle.  Probably a barrel saddle that's about the same age as me. 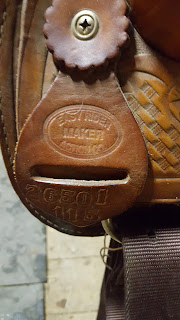 It was picked up cheap and has been sitting, unused, for months.  I set it on Theo's back with no pads and it just dropped into place.  No floating, no rocking, nothing.  Just boom, there it sits.  It might be a hair narrow for him, but everyone that ran their hand under the points went 'no, it feels good, and it's nicely behind his shoulder blade'.  I threw the pad on, tightened up the cinch, and took it for a spin.

The seat is a little small for me, but he sure moves happily in it.  And the barn manager shrugged and said 'use it all you want, you can have it if it works'.  She doesn't currently have a horse and it's a saddle that doesn't fit a lot of stock type horses.

Yes, I'm riding in a halter again.  And I'm holding a foam ice cream cone in my right hand.  I'm still not sure why Trainer A handed it to me.  They use them with kids to help them not turn their hands over while riding, but I was riding left handed .  .  .  Some days I just don't ask.  I mean, it's not like the image of Theo jogging around in a halter and way too big pad under a barrel saddle with me in my lesson attire was going to get any weirder. 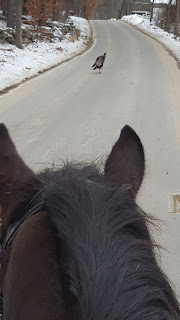 So . . . huh.  That was an unexpected twist.  Now I have to really, honestly consider my next move.  I did order up a 28" long, 1/2" thick wool pad to go under the barn manager's saddle so I can use it.  It's nice that the fit is close enough that I want to go for a thinner pad.  If it fits nice with a 3/4" fluffy pad, it's probably going to fit even better with the 1/2" wool felt pad and I won't have that little worry about it being too narrow.  My hands slide right under it just fine with no pad on, so long as I remember the concho is the point of the saddle and get that back behind the point of his shoulder. 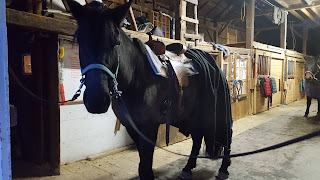 This doesn't help my saddle hunt in terms of finding a match since the saddlery no longer exists.  And I'd like to get a saddle that I can post comfortably in, this saddle is a little too small for that.  I'm going to talk to the saddle fitter again and see what her next suggested move is.  But at the same time, I am getting tired of paying for shipping to keep returning saddles.  If I exchange for another saddle, no restocking fee.  If I don't?  5% restocking fee.  So that's also weighing in to the decision, since this little saddle is hard as a board.  It's not perfect.  But it's free, and it's here, and it appears to fit.

I may just eat the restocking fee and let myself have a break from the saddle shopping and shipping.  Ride in this one for a bit, see if Theo likes it.  It's not a bad saddle.  And it'll encourage me to stay on my diet . . .
Posted by Catie at 5:11 PM