Y'all, there might be a light at the end of the tunnel.  I might have a western saddle that works. 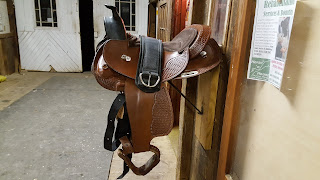 This is my new Startrekk Commander, a treeless saddle.  It's just as pretty as I'd hoped with some shiny silver conchos and a squishy, nubuck seat.  Sure, I had to swap out to a black pommel to test the narrower width Theo needs, but I'll have a matching tooled pommel on it soon.  You really have to look closely and pick it up to tell it's treeless.

I was so excited when it arrived!  Surely a treeless saddle with three different pommels would fit mi papi!  Then I put it on him and almost cried.  What the hell?  How could a saddle with no tree not fit him?! 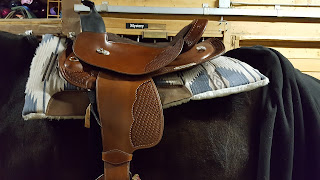 It was all over the place!  It didn't sit down on him anywhere!  It was rocking, lifting, too wide even with the skinny pommel, terrible!  Then I took a deep breath.  That's okay because there's no solid tree.  It's a leather tree that needs to learn Theo's shape.  It's been in storage for awhile so it's mostly pancake shaped right now.  It just stuck out away from him rather than wrapping around him.  I cinched it up and took it out for a spin.

First I had to lunge the kite named Theo.  He got a day off and in winter, that's no good.  It was a nice, civilized lunging session until he heard someone outside of the arena.  He had a complete melt down, dragging me across the ring while he snorted, bucked, honked, passaged, and overall looked like an idiot impersonating a stallion.  One of my friends was standing wide eyed at the door by the time I recovered some control over Theo.  She's only seen him packing his leaser around like a good little school pony.  She was not prepared for the other Theo, the one that requires careful handling and a very large personal bubble.  Then another rider came down.  I ended up working Theo around the ring in hand for about ten minutes, running alongside him and doing transitions from the ground to get him refocused.  Thank goodness for my time on the treadmill.

The saddle looked AWFUL.  It just flopped around up there and then the pad started to slide.  I didn't have my cinch tight enough.  The saddle still wasn't touching him at all.  I didn't have it in the right place, it was too far back.  Funny thing about there being no tree, it can sit a bit over his shoulder and it makes no difference.  So long as that pommel is behind the point of his shoulders, it's all good.  I rearranged, tightened the cinch, and swung on.

My hips never complained.  It really does feel like a treed saddle, complete with a twist.  After about ten minutes, I'd forgotten about the differences in the saddle.  I was able to have a solid school including a big, beautiful trot and canter at the end.  Clearly, Theo likes the freedom.  We got to burn through that excess energy in a big, happy, forward way with him taking the contact forward and down.  I love it when I feel like I can push my hands at him in the contact and I wasn't wearing spurs!  My friend stopped her ride long enough to comment that he looked super happy in his new saddle.

I checked my spine clearance and I had all sorts of room.  Wither clearance for days. 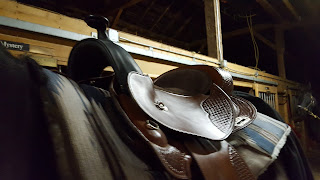 A new, better fitting saddle pad is in the mail.

I like the way it rides.  My leg is right up underneath me and it's a comfy seat.  I think it'll be even better once it breaks in.  Right now it's kind of stiff and squeaky and wants to be pancake shaped and the fenders are killing my ankles.  But after a single ride, I could see a difference in the shape.  I can see how this will become a saddle that is custom fit to Theo's back.  Having the other pommels means I can swap out if his topline explodes with muscle.  Hey, a girl can dream.

I'm cautiously optimistic at this point.  I do have the confidence that comes with not having to worry about the tree fitting.  There's no tree!  I'm a bit gun shy at this point since I thought I'd found 'the one' before, but this is different.  So long as it's not touching his spine, pinching his withers, and is distributing my weight across the panels, it fits.  I palpated Theo's back after a solid 40 minutes under saddle.  Theo chilled and enjoyed his mini-massage.

We're scheduled for a snowstorm tomorrow, but if I can make it to the barn, I'll take it out for another spin.  I think my mind is made up, but I'll feel more confident after a second look.
Posted by Catie at 9:28 PM