First off, my horse has gone completely batshit crazy.  Remember those posts from last year where I enjoyed the fact that he'd ignore the snow falling off the roof?  That is apparently no longer accurate!  Friday and Saturday were a loss since I couldn't leave the house.  We had a snow storm, followed by a pretty significant ice storm.  Enough of an ice storm to knock out power for a couple hours and make a grand mess of the roads.  I live in the boonies so my roads were not at all safe.  Pretty sure his leaser didn't ride in her lesson on Saturday, but she did leave him a Christmas present. 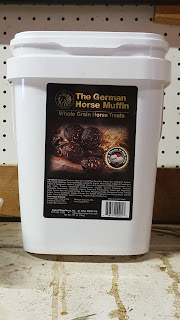 Best.  Leaser.  EVAR.  Who knew crack cookies could be bought by the bucket?

He was a total kite on Thursday, so I showed up today expecting to lunge.  I threw his new western saddle on him and took him down to the ring.  We warmed up on the closed side of the ring and he was a total gentleman.  He tried to play a little, but no yanking or absurd behavior.  A very nervous adult leaser came down and I let her pick where she wanted to lunge since I was going to get on.  She picked the quiet end.  I shrugged, mounted, and started walking Theo around the open end with the big door and a very big open window that faces the woods.  The woods where ice was falling and branches were still breaking.

After a couple minutes of walking in a mostly sedate manner to let him cool off a bit after cantering on the lunge line, Theo threw a snort, spin, bolt at me when something outside snapped.  I whipped him back around, but something else fell almost immediately and he bucked before spinning again.  Of for fuck's sake.

I dismounted and stood there while he trotted, honked, and carried on in a circle around me.  For.  Twenty.  Minutes.  This was after his twenty minutes on the lunge line.  I gave up making him be civilized and just lunged him in his bridle until he'd settled enough to walk.  He was just utterly beside himself.  After his brain turned back on, I got on and we had a perfectly nice ride (on the quiet side of the ring!).  The other rider was pretty freaked by his dramatics, including one attempt at bolting that turned into a half rear when he hit the bridle.  I have many, many sore muscles from working him on the ground and managing his attempts at bolting in terror. 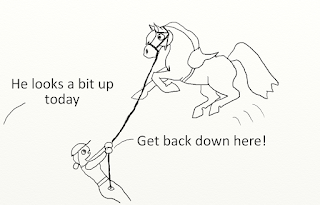 When I put him in his field?  He galloped down the field with grand dramatics and set the whole farm off.

So what the hell is going on?  Well, the weather is uncooperative and Theo doesn't cope well with days off.  I also have to suspect it was a change I made.  Waaaay back in November when he was running out of energy pretty much every ride I looked into some supplements.  Ultrafire was one that came up and was cheap.  On a whim, I added it to his packs.  I didn't think it would work, or if it did, it would be a subtle improvement in his tendency to go forward.  He started getting them in early December because that's how Smartpaks work.  As of the third week of December, we were lunging regularly.

Apparently he was short on B vitamins or something because he has lit up.  Seriously lit up.  I've removed the supplement and I'm cutting it out of his Smartpaks until his new packs arrive.  This is a bit much.  I'm putting him on a different multi-vitamin to supply him with B vitamins, but no more Ultrafire for him.  I know the weather is  a lot of this, but wow.  We'll revisit this supp in the dog days of summer, but it's not for the dead of winter.  Particularly not when the weather is keeping us from working every day.  This week I'll lose two days due to not reaching double digits.  Can't risk him breathing hard or breaking a sweat in those conditions.  Damn it.

But I did successfully ride in my treeless western saddle again and made the decision to keep it.  I'll do some follow up posts of the breaking in process for a western saddle since it's kind of interesting.  Especially with a treeless saddle that's been in storage.  It doesn't know how to be saddle shaped. 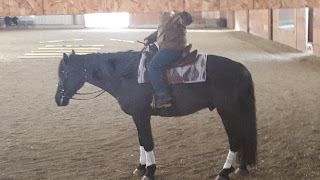 As you can tell in the picture, he reverted to my sweet mi papi after a chance to just let it all out.  He fell asleep in the middle of the arena after my ride and was all cuddles in the aisle.  I'm very sore right now, but I'm not mad at him.  It's not his fault that he was getting quite fit and then Mother Nature decided to play hard ball with us.  I don't think I'll be getting to work him consistently until the second week of January, unfortunately.  Dangerously cold temps are coming.

I guess our ground work will be the focus of this winter.  Good thing I bought some long lines and dusted off his surcingle.