AKA I do not know what I'm doing.

Theo's new western saddle showed up and man oh man, it's pretty.  Even the hubby stopped to comment on how attractive it is when it came out of the box. 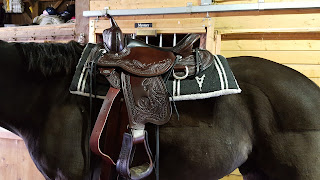 The walnut color really suits him and the round skirt is better for his teeny weenie back.  So attractive?  Check!  And those stirrups are up short enough for me, so the fenders will, in fact, fit.  Which is a huge relief since I was thinking I would need custom cut fenders.  I did run them up as short as they would go and they were actually too short.  I'm three holes from the top.  Yay?  I'm calling that a yay.

Side note, if you're changing the length of the stirrup on a Circle Y saddle, the outside bit slides up to reveal the part that goes in the holes.  This took me fifteen minutes and some googling to figure out.  My previous western saddle had a buckle.  I flipped the stirrup over and saw no buckle, just a leather covered metal thing that went all the way around.  Took some fiddling to figure out that I slide it up and out of the way.  Then adjust to the hole I want and slide it back down till it kind of clicks into place.  Spiffy, but confusing if you've never seen it before.

Don't even get me started on my struggles with the cinch.  More cinch lessons are coming.

Fit?  Hell if I know.  You'd think I'd have a clue, but nope.  I took a lot of pictures and I'll set a second opinion on Sunday.  Initial feelings without the pad were 'yay, it has the right angle on his shoulders!'. 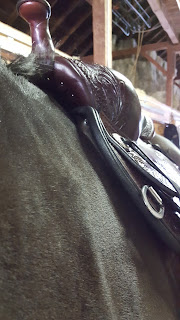 It's actually pretty similar to the angle on his jump saddle. 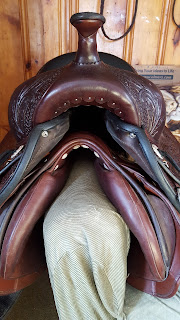 That also shows how freaking huge this saddle is compared to what I'm used to.  My second thought (after omg this thing weighs a ton) was 'oh, no, his withers'. 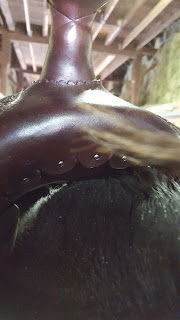 I can get exactly one finger in there.  It's definitely too low.  Enough room side to side and back, but at the highest point, it's definitely too close.  But the pad I was borrowing is a cut back, I decided to try that out. 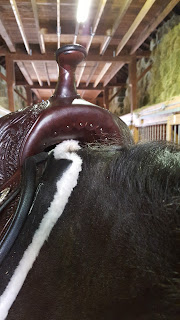 Huh, look at that.  It's a standard 3/4" pad and I could fit my whole hand under there even when I was in the saddle.  So apparently not that big of a deal.

View from the back: 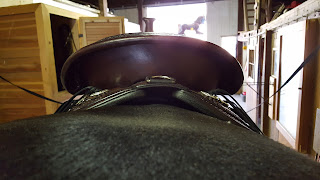 Flex tree, so when I sit down it sits down.  Spine clearance even when I'm in the saddle, ran my fingers under the back to check.  Really can't figure out how to check for bridging with a saddle this heavy.  My attempts really pissed mi papi off since I had to wedge my fingers up under there like I was hunting for buried treasure.  I'll have to get it checked by some people that actually know what they're doing.  I'm so lost.

I took it for a spin and Theo didn't buck me off or tell me to go pound sand, so that's a good sign.  Fingers went over his shoulders without being crushed, so the wide seems to be the right call even if it requires the use of a cut back pad. 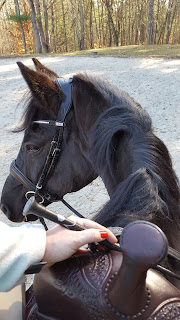 We toddled around enough for me to try it in all three gaits.  I feel very balanced in the trot, potentially in the back seat a bit at the canter.  That may be me fighting the wider twist that I'm not used to yet.  I've got ten days to see what's fit, what's saddle, and what's me.  I thought it was comfy and was very happy to have stirrups that fit me.  We did some work on his turn on the forehand, turn on the haunches, and reinback so we can start working on the idea that randomly offering things to avoid the steps he doesn't like isn't a good option.  I had no spurs and no real plan, so we only worked for about 20 minutes, toddled a bit outside, and called it a day.  It's a holiday after all.

So it fits better than the medium, but not sure if it actually fits well enough to keep.  I've got my friend that knows western saddles available on Sunday and it sounds like I might have a western dressage clinic next weekend.  That will give me some experienced eyes to check and see if this is a winner.