And nothing dramatic going on in my life!  I went home to Minnesota for my scheduled visit, went for some nice walks, and helped out while my mom recovers from a knee replacement surgery.  The only downside to this vacation was a complete lack of papi. 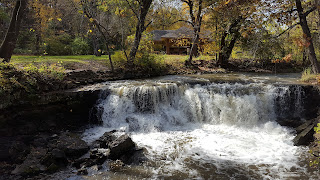 Now I'm home and preparing for my next road trip.  This one will feature mi papi time!  We're heading to our Mary Wanless clinic on the 10th.  Oh, the joys of having my own trailer.  I was able to just sign up and not worry about arranging for a ride.  We'll have three days of torture.  This time I'm staying at a local hotel rather than driving back and forth.  I'm going in with the goal of getting a strategy and or image to deal with my collapsing left side.  This also means I need to get my trailer cleaned and packed this weekend.  I might have been dumb and bought a ticket to a distillery showcase on the evening of the 9th.  Hungover dressage clinic?  Sure, that'll be fine. 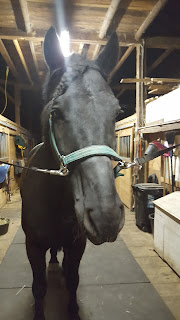 I'm still working on that super basic idea of not letting my hobby start to suck.  We've been doing jumping lessons, both me and his leaser.  Papi is a fan.  It's sad that he's still got an 11' stride, but that's just how papi does and I'm used to it.  He likes to touch the ground as many times as possible between jumps.  He'll do a grid at 12', but a line?  He wants that extra thinking time, kthx.  But he looks really good and is learning to not brace his neck between fences. 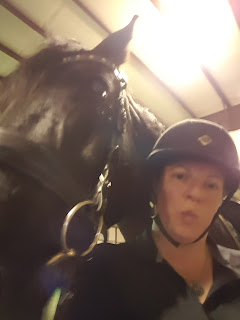 We still have zero selfie skills

I'm also fitting him for his western saddle.  After watching obsessive amounts of video on western dressage, we're going for it.  One of our local shows (30 min away) is doing recognized western dressage next year and bringing in a clinician over the winter.  Woohoo!  I think the emphasis on obedience rather than huge gaits will suit him.  Jog and lope are still hard work, but the fact he wants to take his time about it is a benefit rather than a problem.  I still have to get him well up in front of my leg, but his little strides won't be such a problem.  He's definitely a semi-QH bars boy and it appears I need a 15.5" seat.  And a 32" cinch.  And probably custom cut fenders for my stubby little legs. 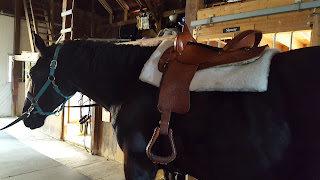 Big saddle that looks very tiny on my boy, still weighs a ton lifting it over my head

I do have a bitch about the saddle shopping process.  I researched, put saddles on him, and picked out my saddle.  The Circle Y Performance Monarch with Flex2.  If I'm going to get a saddle, I'm going to get a nice dang saddle.  I like the Flex2 concept and the cutaway skirt.  It shouldn't put me into a massive chair seat, either.  It was made with western dressage in mind.  But used western saddles in New England are kind of sparse.  No one sells this dang saddle used!  Which is usually a good sign, people seem to keep them and love them.  So I decided to just bite the bullet and ordered up my test ride through SmartPak, along with some Baker blankets for Theo's trip. 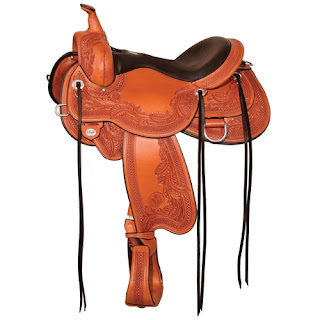 So pretty, not sure what's up with the strings

Wouldn't you know it, my favorite company that never ever lets me down is dropping the ball hard.  My blankets were scheduled to ship yesterday.  Nothing.  My saddle that was in stock when I went to bed last night and is scheduled to ship tomorrow in my confirmation?  Suddenly out of stock and may not be available until the end of the month.  I've got different 'back in stock' dates on different pages.  I called customer service in a bit of a snit because I need to make sure I can ride as much as possible in those five days.  I can't be playing 'guess when the saddle is going to show' for a month.  And I need those blankets!

I've been assured the blankets are going out today or tomorrow.  Surely, they're going out, don't worry, you'll have them in plenty of time.  I've been hearing  a lot of horror stories recently about SmartPak shipping and it's not giving me confidence.  I'm supposed to hear from the Test Ride person when she gets back tomorrow so I can find out when this dang saddle is supposed to show.  I can get the saddle right from Circle Y for the same price, but I'm hesitating.  I'm discovering that western saddles are an absolute do not ride in it if you want to return it, so I don't want to change companies.  I want to know I can try it out and still return the dang thing. 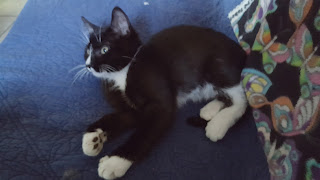 It's just shocking after years of stellar service to have them drop the ball so hard.  My last order was slow, but I thought it was a one off.  Ugh.

I guess I'll have to wait until after our clinic to try out the new gear.  No one wants to wait for shiny new tack to show up.  It's the worst.  I'll distract myself by doing a fall clean up this weekend.  I need shiny clean tack for the clinic and people are starting to talk about the condition of my locker.  There may be a dead body back there. 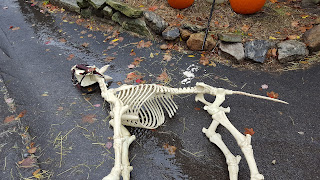 Not the most welcoming sight outside of the barn.  Happy Halloween!