Sunday morning was an early start.  I needed to get to the barn so I could try to arrange for an earlier ride time and get my truck towed to the shop.  I cleared all of my stuff out of the truck and loaded it into my trailer.  Then I got mi papi out for his morning hand walk so they could clean his stall in peace.  Apparently he was trying to escape when they came to clean his stall.

I'm out handwalking and spot a big flat bed pull into the driveway of the house the barn owner lives in.  Whoops, wrong driveway, but a common mistake.  I see the driver looking around and I put my hand up.  I meant to signal I was on my way over.  He took it as 'hey, come over here'.  There's no route for a truck to come over.  It's their outdoor ring, a wide path for horses and wheelbarrows, and then their beautiful barn.  The driver took the wide path without batting an eyelash.  He barely had inches between his truck, the barn, and the railing of the outdoor.  One of the barn managers was standing there, staring in horror.

At this point, I was so overwrought that it barely registered.  Of course the tow truck is driving through the middle of the very fancy barn where I will never be invited back.  I pointed out where my truck was and he hustled right off to load it up. 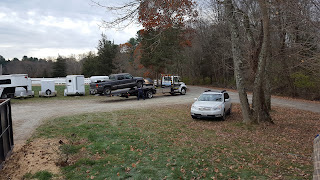 I'm standing out there watching my truck get loaded on a flat bed when I get told that no one will trade ride times with me.  I was the last ride of the day and my emergency pick up didn't want to wait until 5:30pm to pick me up because he still had to haul me home and he gets up insanely early on Monday mornings.  How could I ask him to lose sleep on top of driving down to pick me up as a favor?  I gave up, told him to pick me up after lunch, told the organizers I wouldn't be riding, and hid in the observation room while crying.  Because really, talk about a waste of a clinic.  And it's not a cheap clinic.

One of the organizers found me, freaked out, and tried to make it better.  They offered for Theo to stay an extra night.  Which really didn't help because my ride works on Mondays and that would mean Theo spending another day in a stall.  What if I had a shipper move him on Monday?  I don't know any shippers and I'd have to do it all on the phone from a distance which is terrifying.  Okay, maybe a friend could pick him up on Monday and I could just leave my trailer with them until my truck was repaired?  They're not used to working with people that aren't independently wealthy, I guess.  Yes, I have to go home and go to work in the morning, it's important.  And even if Theo stayed the night, I still need a ride home.

She eventually got someone to trade ride times with me and while it was still going to be late for my ride, it wasn't bad.  I had my trailer completely packed and the plan was for Theo to carry his tack to the trailer after his ride so we could leave right away.

After that kind of a morning, I zoned on the couch and tried to convince myself not to get a migraine.  It mostly worked and I was able to mount up in a generally acceptable frame of mind.  I'm glad I was able to get that last ride in since we were really trying to dial in the combination of keeping my zipper and chin over the middle with both seat bones sharing the back.  Because once I have both of those things?  I'm not collapsing to the left.  It's a correction I can manage on my own.  It's very hard right now, both of my hips were screaming after my ride, but it's a missing piece that's plugging in.  Canter left my right seat bone was off doing it's own thing.  I have to kind of aim it at his left shoulder to keep me in the center.  Then I drop my right shoulder a bit to keep my zipper and chin over his spine and pop, I'm in the middle.  Our canter felt much more organized without me ping ponging around up there.  I felt more plugged in, which was lovely when he decided to spook at a falling broom in the corner.  Theo relaxed and gave me more of his back once I was settled in.

We also started working on how to inflate the right side of Theo's back so that he's more even.  While keeping my seat bones close to his spine, I have to draw more of his barrel to the right.  Like there's a suction cup on the inside of my thigh and I can kind of pull him over with my leg.  It's tricky, I don't have it, but it's a concept for me to play with over the winter.

And then I bolted out of the arena, threw my horse on the trailer, and got hauled home.

I just got the message that my truck blew it's transmission cooler.  $1,600.  Then they can drive it and see if the transmission is okay.  Plus $400 for the tow, but at least that's reimbursable through my insurance.  All I can do is cross my fingers and hope that the actual transmission is okay and we don't have to pay for a new one.

On the bright side, Theo is home and safe.  The trailer is safe and at the barn.  The truck is in the hands of a shop that I trust to not screw me over.  I'm at work, at my desk, safe and sound.  I have lots of sore muscles and some new concepts to work on.  So it certainly wasn't the worst possible weekend.  I didn't end up on the side of the road with a dead truck or anything.  It also wasn't the best weekend.  I did feel like I missed out because I didn't get to watch as many rides, I didn't get to go out to dinner with everyone, and generally was stressed out.

Going to a clinic like this by myself was challenging.  Everyone else had an entourage to take pictures, carry things, be supportive.  I was totally on my own and that seemed to weird people out.  I got a lot of compliments on my nice horse, my riding skill, etc., but I was definitely the odd one.  Also the poor one that had a backyard horse.  Not an easy weekend, even without the truck problems.  I'll have to think long and hard about whether or not I'll try to go next year.  While the progress is great, it's expensive and being completely on my own took a lot of the fun out of it.
Posted by Catie at 9:25 AM