Poor Theo.  All he wanted was to be a bum in a pasture that terrorizes beginners into never asking him to do anything hard.  Instead, he got me.

He was sore after the Vitor Silva clinic, but that wasn't a surprise.  That was a lot of lateral and his booty was feeling it.  Then we had the Mary Wanless clinic less than a week later.  That was three days of carrying himself correctly and displaying forward.  He was a little stiff and sore afterward.  We had two rides working on stretching him out and he felt better. 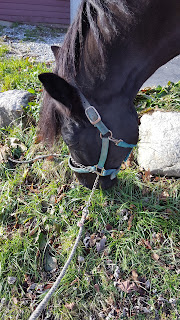 Friday night I had an amazing ride.  There was a lot of activity in the ring, the wind was blowing, and pony came to play.  He warmed up, hit the bit, and worked hard for about 40 minutes including a five minute canter to help him rebuild his endurance.  Good gravy he was nice.  I was broken hearted that the ring was too crazy for video, but that commotion was what made the ride so nice.  I was using other horses as motivation so I could sit quiet and he just motored along under his own power.

On Saturday?  Sore again.  He worked out of it nicely, but he definitely had the look of a horse that had over done it and had some lactic acid to manage.  While grooming him I pinpointed where he seemed to be having the most trouble.  Thighs and hips, both sides, and a little behind the withers.  Basically his quads were sore like he'd hit the stair machine too hard.  Well, yeah, stretching under his midline and lifting himself would do that.  I had the customary 'omg he's blown out his stifles' reaction, but it's on both sides and he responded well to liniment and massage.  No inflammation, no actual lameness, just moving like a horse that might have been showing off for the pretty QH mare the night before and was feeling it. 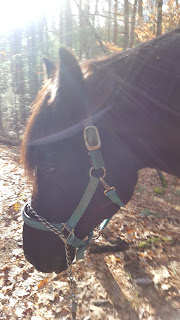 So he got some banamine, a massage, and a stretchy ride.  It's actually the first time I've given Theo any medication since the abscess wars and even then he didn't get much because the lameness was intermittent and we were trying to track it.  Crazy, right?  I'm used to performance horses needing a bit of help.

On Sunday he got a long hand walk on the trails.  High winds and dropping temps had all of the herd up on their toes.  Since I wanted him to chill and mentally take a break, I made it a mutual walk instead of getting on him.  If he spooks while I'm in the saddle, I react.  If he spooks while I'm on the ground, I stare at him and call him an idiot.  Sure enough, he spun twice.  Both times I called him an idiot and ignored it.  He's very polite (with a chain over his nose) and I can hold him with one hand even when he's on high alert.  He had a very nice stroll through the woods, power walking along and seemingly amused by my wheezing.  Pony walks fast. 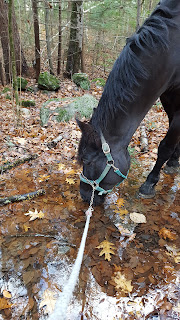 After his walk on hills and uneven terrain, he got a thorough massage with liniment, some more banamine, and back out into his field.  Today he gets new shoes and I'll try to visit him for some lunge line work.  I have an offsite meeting so I have no idea when I'll get free.  Worst case scenario, he has an appointment with Trainer A in the morning.

It's not unexpected that he'll have sore days as he steps up into this next level of work.  Those new muscles are being developed and shuffling is no longer ever acceptable.  Walk/canter/walk is now just part of his day, not something I do twice and reward.  I expect him to jump up into his transitions.  But at the same time, I have to respect the fact that this is hard and that sometimes, he's going to be sore.  I take an Advil the day after a hard work out, he can have the same.