Theo's canter has been rather busted for awhile now.  He had a nice canter in July, but then I started insisting that he travel on the contact and boom, canter went bye bye.  Like it's an act of multiple gods to keep this horse cantering long enough to get through the First 3 pattern.  It's starting to come back, but it's slow going.

Of course I start looking for a physical cause, especially as he's more resistant left than right.  His right hind has always been weaker and asking him to use his hind end more would bring that into sharper focus.  Okay, except that he's actually pushing off more evenly now than he ever has in the trot and walk.  You watch him go and  there's nothing there.  No lameness.  When doing leg yield down the wall, he'll drag the right hind slightly more to start, but it quickly catches up.  I have to think that a regular old 20m canter circle is easier than leg yielding down the wall.

So what the hell is going on?  I can't use the whip to goad him on since that just makes him buck and break to the trot.  Today we were working on the idea that I squeeze and I keep that pressure on until he pushes, then I release.  If he wants me to quit squeezing, he must go on.  He did not like that.  It worked and I got some nice canter work, but he is still downright dishonest in his canter right now.  I can sometimes open him up on the long side, but getting him back is very difficult when he's just looking for an excuse to break.  If I take any sort of a break, he stops.

He'll do everything short of the hokey pokey to distract me from him bracing on the underside of his neck, disconnecting, and dropping his back.  If I let him travel with his nose out and hollowed, sure, he will keep cantering.  But connected and with his back up?  NUH UH. 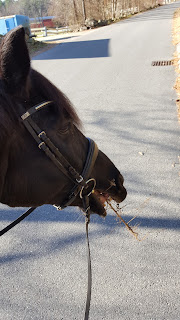 So I keep thinking I should have the vet out, but at the same time, do I want to drop a couple grand trying to find a lameness that doesn't actually exist?  Inject everything and see no change?  X-rays and ultrasounds that will probably find something because they always do, but that something may not be causing him any trouble at all.

I'm currently struggling to figure out how much of this is Theo reverting to the Thigh Master because this new way of moving is very hard.  I look back and remember that he used to be nearly impossible to get through Training 3 because he was so hard to keep cantering.  And then he got stronger and it was fine.  I'm right back at the start of that.  I want to give him the benefit of the doubt and assume that something is wrong, but with his history and lack of physical evidence . . .

Yeah, he's sore some days.  He's working hard on new muscles.  But this is a bit outrageous.  I've ridden arthritic senior horses that were easier to canter.  And I watch him trotting around totally even and happy.  Ask for the canter?  NOPE, can't do it, won't do it, you're clearly asking too much of me.  Unless there's another horse in front of him, then he can magically canter for four minutes straight, no problem.

And yes, he had his Lyme titer pulled, he's fine.  Exposed at some point, but every horse in NH shows that.  Brand new shoes, all the good sups, saddles fit.

Am I giving him too much benefit of the doubt?  Do I need to go back to where I was before and rebuild the canter?  Or do I need to call out the vet, knowing that it's going to be a very expensive wild goose chase?