I'm working on finding a clever term for ammy adult horse owner paranoia.  Ammy-noia?  AAHOP?  There's got to be clever term in there somewhere.  I'm currently using Pony-noia.  I have always suffered from Pony-noia and the fact that Theo is both sound (KNOCK ON WOOD) and lazy as all hell seems to bring it out in me.

I also think he reads this blog. 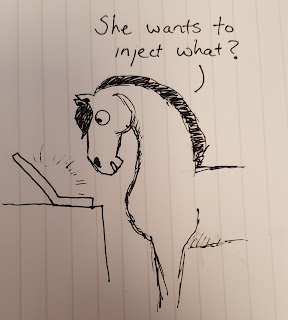 Doodling during work meetings for the win

Vet visits don't appear to be on his agenda.  I went out to get him yesterday and he gave a big ol' head toss before trotting up the field to greet me.  Uphill, uneven ground, totally even and happy to do it.  Well okay then.  Put his spiffy new western saddle on and took him to the indoor for some work and to have his saddle fit checked.

He was downright lofty at some points.  Cantered without giving me a lot of havoc, still a bit resistant to those left hand circles but it was more of a 'ugh, mom, this is hard, can't I do a bigger circle?' then anything.  He really seems to like his new saddle, he moved very nicely in it.  No resistance, no tension in his back.  I'm losing my stirrups every time I turn around, but that seems to be a fenders thing.  They're pre-turned, but pre-turned for someone with normal length legs.  I shortened them up and boom, not broken in the right way for my little legs.  I'm supposed to use a broom to turn the fenders while my saddle is on a saddle rack overnight to speed up the break in process.

I also can't sit the canter in a western saddle right now. The western trainer thought it was freaking hilarious.  She's watched me ride for a year and I usually look very competent.  Some would even say advanced.  Suddenly I could not sit the canter to save my life.  The saddle is trying to suck me down into the 'pocket' where I'm supposed to be, but I'm fighting it because . . . I'm a spaz?  I dunno, but it results in some rather fantastically bad cantering.  She coached me into it, but I felt like I was laying back in a recliner.  So.  Freaking.  Weird.  Sure, a western pleasure lope I've done, but Theo's fairly active canter?  It's a bit different.

But it's so pretty.  And comfy. 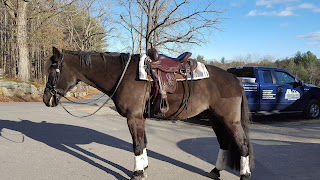 The western trainer hopped on for a bit to take a feel of the saddle.  She really likes it and thinks it fits him well.  We had a disappearing saddle pad problem, but it was a cheapie pad from Tractor Supply I picked up because . . . well, there's no western tack shops in southern NH.  By halfway through the ride, I had to hop off and readjust.  Part of it was my cinch was to loose.  I tend to ride with my girth on the loose side, but that's not a good idea with a cinch and a 3/4" pad, I'm finding out.  I'm also playing with the rigging.  There's three ways to do the rigging (how the girth attaches) and I'm experimenting to see what papi likes best.  The front ring seems too far forward and pulls the shoulders down on him.  The back ring seems pretty far back on him.  I think I'm going to go for inbetween.  7/8?  I have no idea, I am so lost.

Western trainer is dropping off a thick wool pad for me to try out.  The one from Tractor Supply has that fake fleece on the bottom and is very slippery.  I know slipping pads is a sign of saddle fit issues, but a thicker pad should handle it.  Western saddles don't have flocking, so my only option is to take the best fitting tree I can find and then customize the padding, aka the saddle pad.  I've still got some time on my demo if it turns out to be a problem, but right now, I think it's a winner.

And when western trainer hopped on my horse, no spurs, no whip, and put him to work?  Mi papi shrugged and went to work.  Walk, trot, canter with a connection and a halt that she thoroughly approved of.  Even showed off his excellent turn on the forehand.  Turn on the haunches?  Eh, sloppy, but he did offer with minimal fussing.  She really enjoyed him and thought he was unusually well broke for an English horse.  She thinks western dressage will suit him, since he'll be rewarded for his generally laid back attitude.  I'm hoping that going into the ring with the goal of chill as opposed to trying to make him electric will solve some of our spooking and bronc-ing issues.

I was very proud watching him go for someone that's never ridden him before and has a very different background.  And he looked very sound and even and happy.  So I'm going to tell my Pony-noia to chill for a bit.  Instead of telling myself that his stifles are blown and he's going to be retired, I'm adding some SmartMuscle Recovery to his supplements to help him recover from work and writing up a schedule to gradually build his canter back up.  Clearly pony does not want injections.
Posted by Catie at 10:52 AM