I get nervous when I'm riding with people that have a big presence.  Most of the people in my area know Vitor Silva.  He does a lot of demos up and down the east coast with his Lusitanos.  Like this one:


There's marketing to be concerned with, a brand image, etc.  And egos get big.  Trainer A enjoyed her ride with Vitor, but I still get nervous.  Will he help or will he just blow smoke up my ass so that I have a good time and ride with him again (aka spend more money)?

First, I made my horse presentable.  This meant shearing my yak yet again and learning a lot about how to keep clippers happy.  I can't keep buying new clippers and brand new A5s from Oster shouldn't be acting up!  My horse is a freak of nature.  But the new barn handyman gave me an assist with tuning up my clippers (including a lesson in the different kinds of phillips head screwdrivers) and we got through the project. 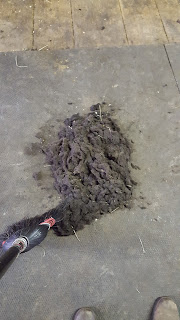 The magnificent tail was trimmed, the tack was scrubbed, and the trailer was hooked up.  I went with my chicken socks.  Bold, let's people know that despite my classical, conservative attire, I'm also fun.  Plain, brown vest, blue check shirt, grey full seat breeches.  Theo went in the silver clincher browband and a white saddle pad.  I wanted to keep things understated, having never met the clinician or visited the facility. 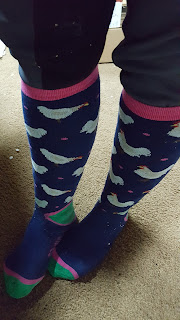 I got there early enough to watch two people ahead of me.  Theo was calling a bit in the trailer, so they offered me a spot on the high line.  I stared, then said nope, he's never been on a high line and I think that will go badly.  He's already in stud mode, I could totally see him rearing and flipping over when he realized he was tied and couldn't go anywhere.  Also, it was raining.  So they let me use a stall to keep him happy with a hay bag while I observed.

Vitor loves to use laterals to get a horse straight.  The first rider I watched was a working equitation rider.  Lots of leg yields off of the wall to center line in each direction, getting the horse stretched out and supple.  Then it was leg yield off the wall, half passe back.  Then canter, turn on center line, leg yield to the wall.  It all built up to her horse doing it's first flying change.  The rider was as startled as anyone when she realized what all of her previous work had been leading up to.  All of a sudden, a clean change on command.  It was eye opening for her.

Then he had a lesson with a nervous older lady and he turned it way down, working on position and just being able to communicate with her horse.  I went and tacked up my beast, feeling much better.  He never yelled or barked and everything he said made sense.

Stall time calmed Theo down a lot and he walked into the indoor like a civilized beast.  The high lines in the corners perplexed us both (and Vitor), but our absolute training on standing while I mount held and mi papi didn't embarrass me by spinning away in terror with me hanging off the side of the saddle.  A couple of walking passes and he settled right down.  Almost like he's done a few clinics in his life.

I told Vitor he was 13, gelded late, a former school horse, and currently going at about First level.  We're having major trouble with leg yield right and canter left, which seem to be related and I suspect come down to strength issues as he was recently informed that he had to submit to the bit.  Now he has to canter in balance and it's hard.  Vitor nodded and pulled Theo in so that he could take a feel.  This meant taking my whip and my reins so he could feel where Theo is currently.  I did warn him Theo has a strike in him, since he had a whip in hand and was quite close to those front hooves.  Theo was a gentleman and didn't threaten Vitor at all, which I took note of.  Theo is usually quick to make an impression on a stranger, but Vitor didn't trigger Theo's FU button, even when he had the reins and was making mi papi use his hind end correctly. 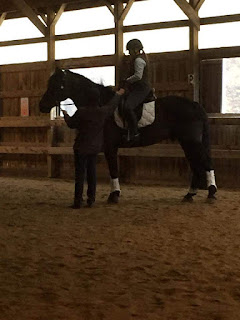 I will say it was freaking weird to sit in the saddle while Theo was put through his paces from the ground.  I kept wanting to participate, but nope, supposed to just sit there.  Might have to book some lessons on in hand work . . .

Knowledge gained, Vitor sent us off to warm up at the walk.  Leg yield off the wall, leg yield to the wall, shoulder fore, counter shoulder fore.  Fortunately I've had enough feel beaten into my thick skull that I picked up the moments where Theo was straightening up quickly, so it became a game of Vitor showing me how to make Theo straight and me managing his parts as needed.  We trotted and did a LOT of lateral work, mostly leg yield.  He wanted Theo supple and soft.  He really, really focused on Theo having a long, relaxed neck and giving me his back.  Give him the rein so he has somewhere to go, set him up to succeed.  Don't encourage a short neck, a horse like him loves a short neck because he will drop his back.  The contact is light, encouraging him to step up into the bit. 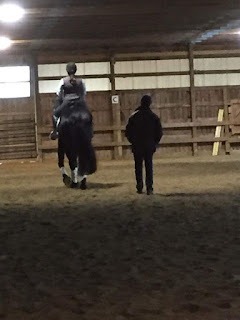 We did leg yields for I swear 30 minutes, mostly at the trot.  Off the wall, off centerline, neat 10m turns at the end that required a change of bend.  When he laid on my left rein, I was instructed to use right leg, right rein as though doing a leg yield and force him off of that right shoulder.  He was to be symmetrical and light in the contact.   Lo and behold, it worked. 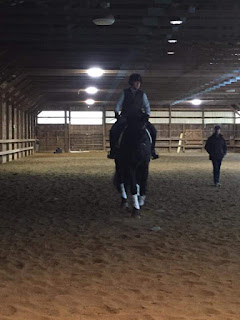 At the end of my lesson, I stepped him into the canter from the walk and it was no big thing.  Still a smidge more reluctant left than right, but it was balanced and chill and lovely.  Vitor said he saw no problem with the left lead and I wanted to cheer.  It's not really busted, he's not broken, he's just learning a new way of going.  Vitor encouraged me to come visit him at his farm to keep going with this progression.  Theo has the challenge of being started too late, but he's a good looking boy and he's a good worker.  He also offered to give me a lunge line lesson.  Whee!

I really enjoyed my clinic.  No yelling, no chasing, no fussing.  Yes, I was told to get him more forward and we worked hard on transitions.  I did tap him with the whip as needed with instructions to praise him, complement him when he did it right.  Theo is a proud horse that needs to succeed.  Despite getting after him to go forward, his approach had Theo more chill at the end of the ride than the start and that was nice to feel.  Theo was chewing and foaming away by the end of the ride, which was something Vitor was actively working toward.  Our homework is to do lots of laterals and when he is laying on his shoulder, think leg yield to get him straight again.  Keep his neck as long as possible while keeping him on a contact. 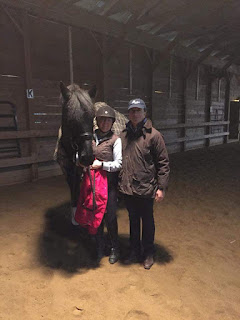 If you get a chance to ride with Vitor, I say do it.  He's approachable, happy to answer questions, positive, and classical.  He wants a happy, supple horse regardless of your background, tack, or level of experience.
Posted by Catie at 6:19 AM