Cuz your man is back in town

Aside from all of the drama with my truck and going by my lonesome to a rather high end clinic, I had one important take away:

My horse is the freaking bomb and he is back, baby!


Seriously, he's back and it's wonderful.  He was a model citizen for his visit.  He may have tried to escape every time someone tried to feed him/water him/clean his stall, but that's expected when he's suddenly thrown in a stall for three days.  He was a little ticked off about the whole imprisonment part of the trip.  So much hand walking and hand grazing to keep him from tearing the tent stall down.  He would sit with his muzzle between the bars, trying to convince people to come rescue him.

But he stood when told, only had little spooks in a rather spooky indoor with an audience and a heated observation room over his head.  He stood in grooming stalls, completely ignored a stranger climbing up on a mounting block to rearrange me, and napped whenever appropriate.  Young horses pinging off the walls, warmbloods losing their minds in the cold and needing to be lunged, and then there was mi papi.  Snoring.  He cuddled anyone that came into reach and built up his own fan club.

I worked on me almost exclusively because Theo was already in good shape.  He likes to pop his shoulders, but I already knew that.  It's something we've already been working on.  He went about his business and I worried about my quarreling seat bones and wandering chin.  Mary had absolutely nothing negative to say about him and said she was impressed to see a horse of his type showing such nice energy.  Then she pet his neck and said 'she must be terribly cruel'.  Theo says yes.

I was complimented that I didn't have to kick him and that it looked easy and flowing.  He did some lovely strike offs from walk to canter and showed off his starter turn on the haunches.  He looked, acted, and moved like a confirmed First level horse that's schooling Second with some confidence.  He stayed on the contact and, for one glorious moment, we had an actual honest to goodness connection with him seeking and me feeling like I could push my hands instead of pulling while trotting around with his back lifted.

It lasted about 90 seconds, but it was fucking amazing.

Of course I have zero media, but I could see him in the mirrors and I heard from the other riders.  Theo was calm, correct, and downright zen.  Two people thought I was a trainer.  No, not in a long time, but thank you for the compliment.  He only kicked out once and that was on Sunday when he was tired from using new muscles.  But oh, what a stretch he gave me at the end of that ride.  Muzzle to the floor, back flexing, flicking along in the trot like it was nothing.

I'll admit to a bit of vindication when Theo was such a super star when he was, far and away, the cheapest horse in attendance.  His fuzzy legs, fuzzy ears, and pony style forelock looked very out of place, but once he was going, no one questioned him. 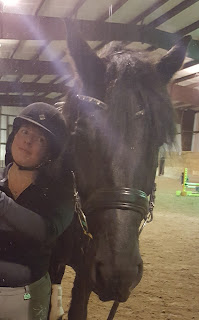 I guess I'll keep him.  At least for another week.