I wanted to make sure these were appropriately abused before writing up my review.  It is now time. 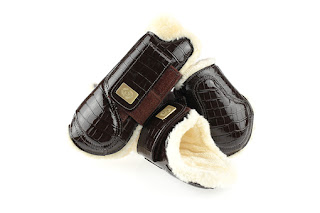 Background:  Theo is a princess and I'm a turnout snob.  This requires me to have cute brown boots that match my brown tack to jump in that also meet with mi papi's standards.  I had him in a set of open front leather boots from Dover, but they were hard leather and he didn't approve.  He showed his disapproval by trying to shake the back boots off at annoying times or refusing to walk after being tacked up.  I also noted some small rubs from the boots and decided they needed to be replaced with something softer.  I needed them for jumping in the ring, flat work, and occasional trail rides when I don't remember to change my boots.

Also, I take crap care of my boots.  Seriously, terrible.  I occasionally remember to hard brush them after a ride, then throw them in my locker.

Product:  The tendon boots from PS of Sweden are a pretty new product for them.  They're sold as a full set and are an open front boot, the type that's popular with the show jumping crowd.  They're faux leather, either plain glossy or a crocodile print, with a teddy lining.  Nothing rigid in the boots.  They come in two sizes, cob and full.  They're held on with velcro.  I got a set in brown croco print to go with my tack and give papi a bit of style.  These do not have the metal tag the current version has, I got mine before those came out.

Review:  I got these for the introductory price for the set, so I really didn't have any worries.  For a full set, they're very cheap.  Even now they're just at $100 for a set.   I got my set at the beginning of December and started using them for pretty much every ride. 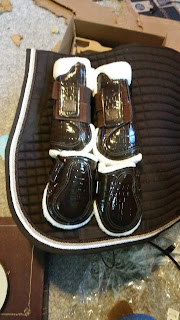 So shiny, so pretty, I thought they would stand no chance in hell of staying that pretty once they were at the barn.  White lining?  Ha!  They're not real leather and I figured they wouldn't survive heavy use.  But right out of the bag I noticed how soft and squishy the lining was.  They're shipped flat so I had to velcro them closed and let them sit for a day so they'd quit trying to spring open.

Once applied to Theo's legs, he gave his approval.  No protesting, no kicking out, no attempts to shake them off, and no rubs.  Five-six days a week for three months and still no rubs.  For that reason alone I'd buy them again.  He even protests having polos put on, but these he doesn't mind.

As far as durability, they're better than I thought.  After three months of use and an adventure through a bunch of mud puddles, I chucked them in the washer and even tumbled them in the dryer on low.  This is how they came out.

What do you know, they actually are machine washable!  I did them on the delicate cycle with cold water, so yes, they're still light tan on the inside.  You should have seen the state of them when they went in.  The terry bounced right back, though, and feels great.  That was my most pleasant surprise, that they're just as comfy for Theo after going through the machine.  I'm going to give them some fluffing with the hard brush, then they should be ready to go back to work until the next time I decide to go in the outdoor while it's soaked.

They do show wear from where Theo's kicked them.  Here's the worst of it.

Yes, Theo does interfere and trip over his own feet, which is kind of why he needs boots.  On the inside of the front boots, the gloss is being kicked away.  The material is still sound, no ripping and you can still see the croc marks, but the shine is pretty much gone where he strikes.  Not so bad in the back (all of that strengthening is paying off!).  The stitching keeping the lining in place is also holding up.

The velcro is holding up fine.  I do sometimes have the stop part of the velcro pull back, but its not common and Trainer A just pushes it back down when she spots it.  No trouble with boots coming off.  Have had some trouble with the front boots wanting to rotate a bit so the opening faces slightly to the outside instead of straight ahead.  They're flat when they show up and break in to the shape of your horse.  I think I put them on crooked the first couple of times and it stuck. Until they break in, they don't want to wrap around your horse's legs.  I'll keep a closer eye on the way they break in for future sets.

Protection wise, they're good for a horse that occasionally interferes.  There's nothing rigid to them and they soak up water like sponges.  Not for cross country, wet trail rides, or any situation where there may be a serious whack.  They're squishy, stylish, and comfy, not robust or hardy.  I love them for ring work, they shrug off most of the dirt and don't impede movement.  I don't use them outside of the ring except short trail rides when it's dry out.  I also get a lot of compliments on them, very stylish.

Conclusion:  Great purchase, very happy.  They're lightweight protection for ring use and fill that role perfectly.  They're wearing well, though the gloss is coming off in the strike area.  Machine washable without the lining being ruined or matted!  Not recommended for adventures outside of the ring, they soak up water like crazy and then sag.  I'll be adding a set of the dressage boots in white for formal occasions in the near future, much faster than polos and Theo much prefers the boots.
Posted by Catie at 1:32 PM