I discovered something new today in my dressage lesson.  It was an ah-ha moment and something that I think will help me quite a bit as I move forward with Theo and we scrabble our way up the levels.

Theo's butt is a barometer.

As we went and the pressure built, his butt dropped.  The closer we got to his threshold, the less horse I had behind the saddle.  As Trainer A put it, his croup dropped three inches while we worked on turn on the haunches.  He was seriously considering blowing his top at one point because I kept telling him to not swing his haunches when I wanted a turn on the haunches, but that's what he's good at so he kept offering it.  No, no, not what I want, try again.

It was a relief when we got some good steps and could call it a day before we dropped too far. 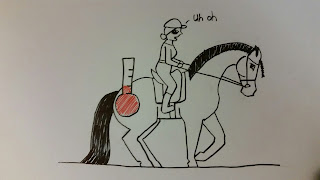 So as the barometer drops, the chance of storms increases.  Works out just like the real thing.

After our lesson, I took mi papi out for a nice mosey on the trails to convince his butt to come back up and to forgive me for pushing his brain that hard.  I also spent a good five minutes rubbing his ears after I got off while his head hung down around my knees.  I think he forgave me. 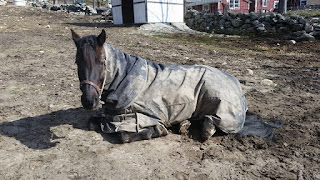