No, Mother Nature, this isn't cool. 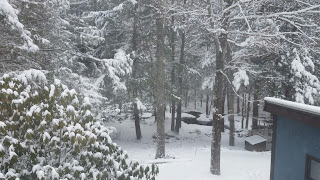 I guess it's a good thing I spent Saturday outside galumphing about because we won't be doing that again for a bit.  I guess it's also a good thing mi papi's snow shoes weren't prematurely removed, like I was considering doing.  That's New England for you.  Wear a dress on a nice day for March 20th after taking your horse out on trails that are in solid shape, get out your snow shovel on March 21st.  Happy Equinox.

I guess this is her way of suggesting that Theo and I get our butts back in the arena for something more productive than soccer games.  With Trainer A back, it's nose to the grindstone time.  One month until our first show of the season.  Entries for the recognized shows start in one week.  I need to figure out what tests I'm going to do.  I'm thinking Training 2 and 3 at that first recognized show because Theo has no show record.  Well, he has no record of successful completions.  He kind of jumped out of the ring in his one attempt at going to a recognized show, back before I met him.  I'm glad he didn't have a horse ID yet.  He can start his new ID as a blank slate and we can pretend he never did that.

It's kind of fun to go into a dressage show with the goal of 'No E'.

As for the schooling show, I'm kind of leaning toward Training 3, First 1.  We've got the moves for First 1 and I think he's developed the carriage they'll be looking for.  It would be a good baseline.  On the flip side, I remember Theo's first outing last year.  I spent an evening with a heating pad after all of that bronc'ing and spinning.  I could very well be striving to simply avoid elimination yet again.  But I suppose it doesn't matter which test I'm doing if I'm going to be demonstrating airs above the ground.  Or I'm just making an excuse for myself to move up sooner.  I might be a bit eager to move back to First.

I don't know why.  That just brings us closer to the sitting medium trot hell known as Second.
Posted by Catie at 6:59 AM