Theo's heart monitor arrived and after work beat me up for a couple of days, I finally got a chance to use it.

So, so easy to put on, by the way.  One pad under the saddle, one pad attached to the girth, done.  Bluetooth picked it up on my phone and away we went.  It was a breezy but sunny day so I went into the outdoor so I could get a clear look at the data.  Working in the indoor can throw the speed off sometimes.  Not a surprise when in the country in NH, reception is always a bit hit and miss.

How fit is Theo?  Here you go. 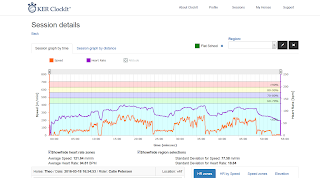 An hour of work and he didn't break a sweat.  Sigh.  But on the plus side, my canters were faster than the last time I rode him in the ring by about 30 mpm.  Progress!  I'm seeing now why his cardio isn't improving.  We never get his heart rate up above 60% of the maximum.  The highest we got was 127 bpm.  His resting is about 46, by the way, and he got back to 55 bpm in about five minutes after we stopped cantering.

The very end of the chart when we went completely still is when he decided his ear itched and he managed to take his bridle off.  Yes, that's a thing he does on occasion.  It doesn't even freak me out at this point, though everyone around me was rather shocked when they noticed Theo was standing about with his bridle and fly veil on the ground.  Mi papi is a dork.

So we need to up the anty a bit in his work outs, at least for a couple of bursts.  He's not getting that out of breath and he's clearly working within his current fitness level.  He's just a lazy bum, which was what I figured.  Since he had his shots I mostly took it easy on him, though I did insist he canter along like he had somewhere to be.