I'm a firm believer that horses are just as brave as we expect them to be.  I expected Fiona to be bomb proof and she was.  It took a bit of time, but she was the type to bravely lead the march over bridges and past absolute chaos once she believed that I believed she was bomb proof.  Theo is well on his way to being the same way, so long as I have cookies.

I took this one while a contractor was in the corner installing new mirrors.  He had his truck in the ring along with a nail gun and a circular saw. 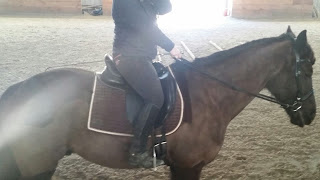 Theo helped the man measure some boards by shoving the tape measure around and generally being a nuisance.  A couple of cookies and he decided the power tools were really not worth worrying about, not even the air compressor turning on and off.  The second picture is terrible because he was being a giraffe, but check out his tail. 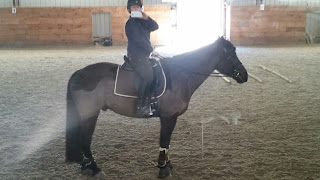 Theo and I are the king and queen of sucky selfies

I like it, it makes him look all sporty at this length.  He carries it up, so it's just above his fetlocks when he trots.  It came out shorter than I planned, but there were some technical difficulties while shortening it. 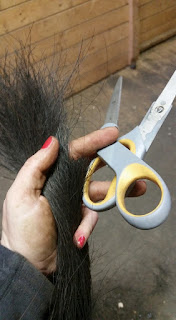 Whoops.  Snapped the screw on the scissors in half, had to start over with bandage shears.  His tail is just a bit thick.

As though the construction wasn't enough exercise for the pony brain, I tortured mi papi even more after we moved outside.  It was a beautiful, sunny day so we worked in the outdoor.  Then I spotted the flags along the end of the ring and, well, I'm a bad horse mom. 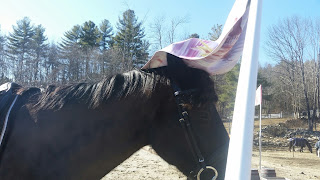 Moooom, stop!  The other horses are laughing at me!

Terrible, terrible horse mom.  But I bring the good cookies, so I am forgiven.  These things are amazing. 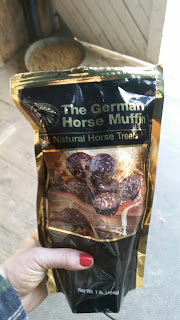 Picked them up at the tack shop at random and Theo will turn himself inside out trying to figure out what I want him to do in exchange for one of these.  I guess that means the training is going in the right direction when he will offer every behavior he can think of instead of trying to mug me.  For these?  I think he'd walk through fire.  Might be laced with crack.
Posted by Catie at 5:43 PM