This is my first season actually campaigning in dressage.  I've shown in dressage for years, but it's always been an off to the side, once in awhile thing.  A break from the usual shows.  A day where we don't have to worry about distances, height, or what the hell the course designer was thinking with that brush jump.  Seriously.  Bigger than my horse.

But as a campaigner that has to worry about scores and play with the big kids, I'm learning some interesting things about the way the tests are perceived.  This has been validated by talking to other, far more experienced dressage types.  If you're doing the third test in a level, you should pretty much be riding a horse that's ready to move up.  The judges are expecting that and holding you to that standard.  A test that gets a 66% for Training 1 will get you a 63% in Training 3 and that has nothing to do with the change in difficulty.  The judges just expect you've mastered the level, are qualifying for regionals, and are looking to move up.  Looking at the program from my last show, they're usually right.  90% of the pairs in Training 3 are after qualifying scores.  Getting a 63% or higher was surprisingly difficult.  I thought I had it because Training 1 and 2 were so consistently at that mark.  Nope, judges want more when you ride the third test. 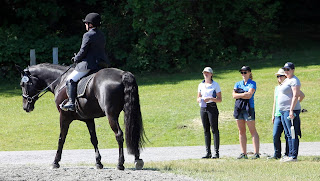 My entourage by the warm up ring at GMHA.  Yes, they were all with me and judging by the expressions, Trainer A just told me to stop forgetting how to ride.  Again.

Theo's going as a First Level horse, so he's getting good scores at Training 3 so long as he's not a bronc.  But I won't be moving him up to First 3 this year.  If I do, I'll be judged as someone that's mastered First and is looking to qualify and move up.  I should be almost ready for Second before I make that attempt.  They just expect more from you.  I don't mind, I'm certainly not bitching, but I always thought of it as Training Level horse for all three tests as opposed to the difference between one starting out and one that's mastered the level.  It makes sense, just didn't occur to me.

I'm also learning that there's a common strategy for the show year.  The first half of the year is about getting scores.  Regionals, freestyles, medal scores, whatever.  You come out at the level you've already nailed down and knock off the scores you need for the year.  Then in the second half you move up when you don't have deadlines hanging over your head.  I used to think of levels in terms of 'this year Training, next year First'.  Now it's more 'get scores at Training, then move up to First once those are done'.  Next year I'll come out with First 2 and 3, get the scores I need handled, and then move up in the fall.  Turns out this is a common pattern and one that I'll probably keep using throughout the years.

I've seen that turn out is not as important as people make it out to be.  And it goes both ways.  The judges really don't care what color jacket you're wearing, so long as it's legal.  They also don't care if it has the latest in piping and coordinating ultrasuede collar.  Braids are important, but perfect, trendy braids aren't important.  So long as they're neat and laying down somewhat, you're good.  Just go.  If your turnout is legal, clean, and not jarring, they don't even seem to notice it.  Buying a Pikeur is pretty much for the rider and the spectators.  My bland, charcoal grey hunt coat and $80 Piper breeches are perfectly acceptable to them. Not worrying about turnout is going to hurt your score, but obsessing over it won't help you.

Some judges do protest the heavy bling.  I talked to a judge the day before the show at GMHA (not judging at this show) while she gave Theo scritches from the judge's booth to help with his little fear issue.  I had the big bling on since I was just schooling.  She commented on it and I told her it was just for schooling and he'd have a plain browband to show.  She said judges will ignore it if you're very solid, but you might as well put a beacon on whatever you blinged.  They're going to look at it.  They're going to assume you're proud of it and want them to look.  You better be right.  I'm never, ever blinging my spurs, stirrups, cuffs, gloves, or helmet.  I don't even know if I'll get those Lorenzini stirrups for Christmas, as they would draw attention.  I will bling my browband with glee because I'm so proud of my horse, but me?  Not so much.  Please keep your eyes on the horse and off of my still unsteady position.

Final lesson from the year so far?  Taking July off was genius.  We're right around 90 every day for the next 10 days.  For a black draft cross, that's hard.  It's the perfect time of year to take a month off from competition.  This may become a rock solid tradition for me.  I feel quite smug sitting in my office typing away without any real pressure to work hard in the heat.

But for those of you keeping track, I start my lessons back up again today.  I am weak.
Posted by Catie at 9:33 AM