How about that weather?

New England is fun.  Remember when I posted this?

92* for a high with a heat index near 96*.  That's not okay when you also have a wind chill of -34* in the same calendar year.  And we're on day 3 of this nonsense with two more to go.  You really can't be good at both very hot and very cold.  I know that looks pretty mild to anyone from the south (grew up in Lousiana and Texas), but let me tell you, we Yankees don't handle heat well.  I don't even have central air in my house.  And my  office is on the top floor.  I guess I could look at it as a free sweat box?

Fortunately  you can see the break coming on Friday.  Those 83s and 84s are what we are supposed to get in July.


It's harder for Theo than me.  He's a northern boy, born and raised.  He's also solid black and not exactly dainty. 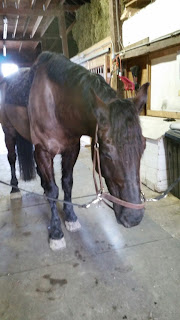 Keeping a white fly sheet on him all day helps, but he's still having to come in for the afternoons when he's sweating just because he exists.  With this weather, we're not doing a lot of heavy work.  On the flip side, Theo is proving to be just about the fittest horse in the barn.  He's something of a cardio beast now and can recover from even canter work.  Unlike last summer where I had to set off a bomb under his tail to get him to move when it was hot out, he doesn't mind working in the heat for a bit.  He'd rather not, but he can be convinced easily enough.

We're getting a lot of miles with walk/trot/walk combined with laterals in this weather.  And it's starting to show.  We're starting to get some topline in front of his withers and he's starting to carry his head in a nice, low, natural way with a lovely lift through the base of his neck and without my help.  Canter is still a bit of a wreck, but we'll work on that once the heat breaks.  Our month of no hands is paying off dividends.

2.5 weeks until we go back into the show ring.  The heat should break, my lessons should revert back to the normal pattern, and the pressure should be back on next week.  Our break was well timed, but it's time to get back to the grindstone.  I need to get First 1 and First 2 memorized and ready to roll.  We're super fancy First level dressage types now.  That means I have to know where the heck I'm going in the ring.  Where the heck is L?
Posted by Catie at 10:41 AM