There's this move they introduce in Second called the turn on the haunches.  It's pretty basic stuff for most horses.  A lot of horses pick it up for other reasons, like opening gates or turning around in tight places or showing in hand.  I've never really had a problem teaching it to a horse.  Until Theo.

I swear, something in mi papi's brain fries every time we go near this.  We've used the wall, we've worked it with the trainer on the ground assisting, we've used poles and cones as visual aids, we've done little baby steps.  Nada.  We've been working on this for a year!  He wants to plant his massive shoulders and swing his butt.  When you correct him, he freezes his back feet and steps around until he can't keep his balance anymore and then steps out sideways.  No, no papi.  That's falling on your face, not turning on your haunch.

Last night Trainer A set up some some cones for my adult ladies lesson (after she took my stirrups away, damn it).  Each of us got a cone.  We were supposed to do a 360 around them, head in. So turn on the forehand, but not a pivot.  Cool.  It was a little tougher than usual because Theo couldn't just lay on one shoulder and pivot.  It took a couple tries to get it going.  In the end, it was less a turn on the forehand and more a step of leg yield, a step of turn on the forehand, repeat.  They have slightly different buttons, so I was shifting my leg to move his haunches more than his shoulders, then shifting my leg back to keep the shoulders involved.  Okay, cool, still easy enough for papi's brain but not what we've been doing.

Then she had us turn around and do the circle with our heads out.  GROAN.

We tried.  We flailed.  We experimented.  Smoke came out of Theo's ears.  Finally, desperate to make him move his hind feet, I shifted all of my aids over to the set for half-pass/side-pass and shoved him over.  He understands that, so he moved over.  So we kind of did half-pass on a circle, upping the pressure on his shoulders like a shoulder in so he'd move them over more than the haunches and eventually get back to where we started.  That got him moving and his ears flicking.  We got around a 10 meter circle and trotted away with carrots and celebration, then came back and did the circle smaller.  It was a delicate balancing act to make the hind legs take smaller steps and ask his shoulders to come around, but so long as we walked into it and I thought half-pass, not turn on the haunches, his butt kept moving.

After about six reps, we had his hind feet tracking a small, one meter circle while his shoulders came around in a nice, reasonable flex.  I could feel him lifting his shoulders to make it work, which is progress.  He's finally using the right set of muscles instead of planting his hind feet and falling on his face! 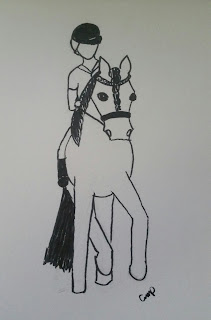 It's hard to describe what I was doing in the saddle.  I don't tend to think in terms of aids, I think in terms of his body parts.  Trainer A said 'shoulders!' and I moved his shoulders more.  This is the problem with riding off of feel and experience.  I'm not entirely sure how the hell I do it, I just know I can do it on command.  Some of it was trial and error.  I have to set him up flexed in the direction of travel, he can't manage it flexed away from the direction of travel.  Then it's outside rein while shrinking the steps and active push with the outside leg, like a leg yield or half-pass, but holding that inside leg to keep his hind legs engaged.  And don't do the hula, stay in the center of the saddle or your poor horse is going to try to go where you're leaning and you'll have a mess on your hands.  Yes, we did this.  A couple times.

So that's one for the tool box.  When the hind feet aren't marching and taking the weight in a turn on the haunches, half-pass/side-pass on a circle and shrink down the circle.  Our new exercise is to walk off of the rail heading toward a cone on centerline.  Shorten steps and set up the flex in the direction of travel as we approach.  Half turn around the cone, keeping the hind feet as close to the cone as possible without losing the march behind, then walk out.  Our goal is to get the idea planted in his little head, get the strength in his butt built up, and gradually work the size of it down till he's marching on the spot.

As a nice little side effect, mi papi gave me my first half-pass at the trot.  Half-pass?  Come on, mom, give me a real challenge!
Posted by Catie at 8:24 AM