First off, thank you to everyone that sent such nice comments about Theo's progress.  This is what happens when you try to not think about something that's bugging you.  You let it build and build until it gets loose and suddenly it's all you can see.  It was a relief to hear that people are seeing what I'm seeing and that I'm not horse blind.

With my spaz attack over Theo's training behind me, I've been trying to get myself back on track with playing around.  The weather hasn't been too bad, but the bugs are another story.  We went out in the Ritz for some big canters and jumps on Thursday.  We only made it about ten minutes before the deer flies chased us back into the arena.  I kept it to transitions with him as long and low as possible while stuck in the sandbox.  It was nice to feel him round up and fill up the saddle while he stretched through his neck.  It was all about relaxation and getting him to stretch out as much as possible.

A cold front moved through last night, dropping temps into the seventies and giving us a nice, steady breeze today.  I figured this was the best shot we would get at the trails without being swarmed by bugs.  I slapped Theo's heart monitor on since I wanted to do Walnut Hill.  I also put on his fly mask, soaked him in fly spray, and grabbed my fly whisk.

As promised, this time I got some pictures of what Walnut Hill looks like. 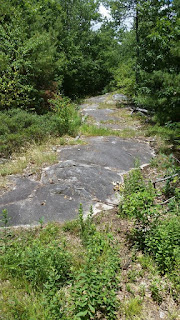 Doesn't every dressage horse do this on the weekends? 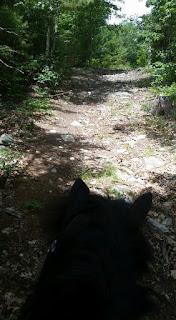 The path is just as steep and rough as it looks.  It's an old logging road and not maintained.  This was Theo's first time doing the hill by himself, so I was very pleased that he marched up bravely and didn't give me a hard time.  When we got to the top of the first climb, we were swarmed with flies so I had to turn and head right back down.  We didn't get to do the second, steeper climb.  The path is too rough and I don't know it well enough to do anything but walk, and without speed we couldn't do anything about the bugs.  Instead we headed across the street to have a quick run down the rail bed.

Cantering kept the clouds of deer flies off of us, but just barely.  Theo was highly motivated to keep going forward.  We cantered sections we usually trot and trotted sections we usually walk.  It was very cool to pick him up and slalom him around the trees and roots at the canter.  It's not something I would have dared before this. 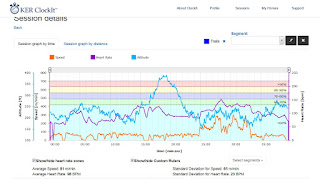 His fitness is doing fantastic.  By the time we walked back to the barn and I dismounted, his heart rate had completely recovered and his breathing was normal.  Even the hill climb didn't get much of a spike in his heart rate.  He was sweaty but content after his workout.

It's going to be hot and dry all week.  We're scheduled for jumping and a fun group lesson this week.  Despite my plans, I don't think we'll get to go out on the trails much.  The flies think we are far too tasty.
Posted by Catie at 11:56 AM