Remember the scrape and stovepipe leg right before our last show? 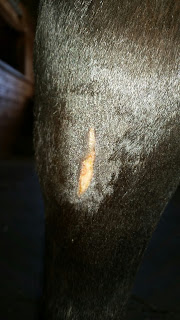 After the poultice and standing wraps won the battle, the leg stayed down and everything was cold and happy.  But there was a lump behind the scrape that wasn't going down.  It just sat there, cold, non-reactive, but there.  People keep telling me it's not huge, but it's on his hock.  Everything on his hock is going to look huge to me.  With it suddenly going cold and firm, I thought encapsulated infection just waiting to flare up again later.  I might be a bit paranoid.  With this in mind, I called in Theo's former owner, the vet.

The poor vet was running late and had been on emergencies all night.  At least my farm was straight forward for him.  One was a 26 year old appy pony with a tumor that's been surgically removed twice, but it's coming back.  Unpleasant talk, but a non-surgical plan was made and will start once this heat wave passes.  Don't want to stress old ponies when it's 94 degrees out.  Next was a pair of older horses struggling with their heaves in the very hot, dry weather.  Drop off their meds and some antibiotics for the mini.  Then came Theo. 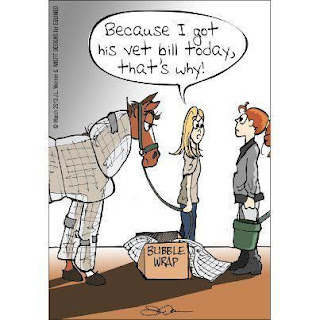 It's quite a bit of fun to pull Theo out for the vet these days.  I don't want to have the vet seeing him, but so long as it has to happen, at least I get to fun of pulling out a horse he has trouble recognizing as his old nemesis.  I also get to say stuff like 'he qualified for regionals so I want to make sure I nuke whatever that is now rather than wait and see'.  Even exhausted, my vet started grinning over mi papi's change in fortune.  He looked the leg over, palpated it with vigor, said 'scar tissue', and that was it.  No machines, no draining, no treatment plan, nothing.

I took my first deep breath of the day when he smiled and said cosmetic.  Not near any tendons, no impact on anything, just a little spot of scar tissue due to the infection that flared up.  Woohoo!

I slapped my tack on so I could catch the big trail ride that was going out.  Fortunately for our poor vet, by the time I hustled out to play lead pony, he was done with the last horse for his call.  Another older horse, this time with a mystery swelling on one hind leg that I'm describing as wind puffs on crack.  He said ultrasound and the owner choked on the price for her sound trail horse that pretty much just walks.  So she's getting wraps and observation for now.  The vet escaped with no more equipment than a stethoscope and no more drama then someone having to pin the mini that doesn't have anything approaching ground manners.

Theo and I escaped to lead a trail ride.  It works out well when the adult ladies go out for a lesson and it includes me.  I take the lead, Trainer A takes the rear, and we keep everyone sandwiched between us.  It's usually a hypothetical safety net but Miss Thang decided to test this.  She was barging around, cantering in place behind Theo, and finally made a break for it that her rider couldn't stop.  Reflex overruled my common sense that says I shouldn't let Miss Thang run into mi papi.  Too high a chance of it going badly.  I heard the commotion behind me and swung Theo sideways to block the trail because that's what you do when you're leading a group of beginners on school horses.  Miss Thang ran into his magnificent butt and came to a quick stop.  To my absolute relief, Theo stayed on the bit and stood rather than take offense to her behavior.  He got a cookie while Trainer A traded the rider so she could handle Miss Thang and the student rode a cute pony instead.

Then we all went and got margaritas.  Because it was 94 degrees out, the vet visited, we wrestled and pinned a mini, Theo played road block, and we got covered in deer fly bites.  Barn life is like a box of chocolates.  You have no idea what you're going to get.
Posted by Catie at 7:31 AM