It was one of those weeks where work beat the snot out of me.  After a couple fourteen hour days and a massive amount of stress, I took a half day yesterday as a mental health day.  Which is corporate speak for taking time off so I don't rage quit my job when they've been completely ridiculous with their expectations.

It's not very often that I get to escape in the first half of the day.  I zipped out to the barn with an iced coffee in hand.  The heat has been unpleasant lately.  Since it's summer and a lesson barn, summer camp was in full swing.  The barn has Girl Scouts out a couple times a week for their horsemanship program.  I found fourteen youngsters roaming about, highly supervised and very excited about absolutely everything.  They were all down in the lower barn while I tacked up in the upper barn.

I'm not actually good with kids, as a side note.  I was quite pleased with the arrangement.  Kids at camp assume every horse is totally safe to touch and while I adore mi papi and he is very safe on the ground, he's also very big.  It also annoys the snot out of me to have kids touching my horse and my stuff without permission.

Between the 78* temps, the 12mph wind, and the mostly cloudy skies, it was the best riding conditions we've had in awhile.  It rained pretty heavily over the weekend so the footing was actually good and not an acceptable replacement for concrete.  And looking at the forecast, it was going to be the best we were going to get for at least a week.  I decided to skip my planned schooling session in the ring and tossed his jump saddle on for a day of playing in the Ritz.

I didn't really think about where the Girl Scouts had gone until I was galloping Theo up the hill at the corner of the field closest to the barn and heard 'OH MY GOD' in a pitch that should have been in audible to me.  I glanced over and the entire group was ignoring their lesson on anatomy and watching me tear around the field.  I'm pretty sure I managed to completely derail the lesson since every time I went by I could see them all turning around to look.  It got worse when we started jumping.

Theo was feeling his oats with the cooler weather, stiff breeze, and the opportunity to just cut loose.  He even gave me a half buck/head shake combo when we first started cantering.  I liked it, since I don't get a lot of wahoo moments out of him.  I like him showing that he's enjoying the work and feeling good.  He took the bit a couple of times, asking to go faster.  The nice part of him not being a lesson horse any more is that I don't have to correct that because it might scare some beginner.  Screw it, I don't mind, it was basically nothing, I can stop on a dime in a D ring, carry on, mi papi.  You're a fancy dancy show horse now, you get to be more horse than the average beginner can handle out in the open.

We jumped everything in the field, much to the amazement of the Girl Scouts.  The two stride combination, the big log we've never jumped before, the steep uphill.  Theo's adrenaline was up and he wanted to take on the world.  We did some transition work on a circle in the semi level part of the field and I definitely had a lot of horse to work with.  I had to keep an eye on him due to the humidity.  He's a cardio beast, but the field is rolling so everything is either uphill or down.  It doesn't seem like a lot, but it ups the difficulty on everything we do.  He was blowing hard when I pulled him up after his last jumping round.  We went for a walk down the road to let him chill out and he was noticeably tired.  He moseyed along on the buckle, content but definitely tired.  I'm glad I pulled up early.  With his adrenaline going, he didn't give me his usual signs of being tired until we were out of the field and having a nice walk.

It worked out so beautifully.  He had a nice romp, I got to shake some stress off, he got to cut loose, and then we had all afternoon to play with his hair.  Beauty like this doesn't come easily. 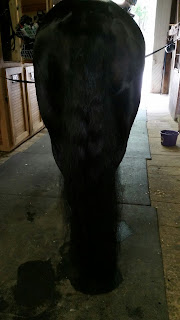 That tail will be the death of me.  It's a good thing he loves having it brushed.  I also pulled his mane and evened it up.  Then he got tucked in a stall for a nice afternoon nap out of the heat and bugs.  Severe storms were in the area so Mr. Fancy Pants was on the list of horses to come in, just to be safe.  Life as a show horse agrees with him.  He's now on PM turn out, so he comes in when the heat and bugs are at their worst so he can relax in a stall.  He wears his full bug armor when he's out and no one heckles me about it.  Theo's a show horse, of course he wears his sheet all the time.  You can't have his coat bleaching out or bug bites all over his neck.  If he looks uncomfortable, he comes in.  If he's bored, he goes out.  Anything the fancy show horse wants, he gets.

And, amazingly enough, the complete shift in the way people see him has changed how he sees them.  Everyone gets touches and inquisitive snuffles now.  All of the barn girls know that reaching out with ears back is actually a request for ear rubs, which he now gets.  Theo is no longer the Thigh Master jerk that tries to bite everyone.  He's now dubbed The Cadillac and people feel privileged to get to ride him or handle him.  Hell, even I feel privileged to ride him.  It's been a long time since I galloped down to a 2'9" log with no fear or second thoughts at all.

July's half way over, almost time to get back to work.  I'm looking forward to it, but I'll miss our mad adventures.
Posted by Catie at 10:11 AM